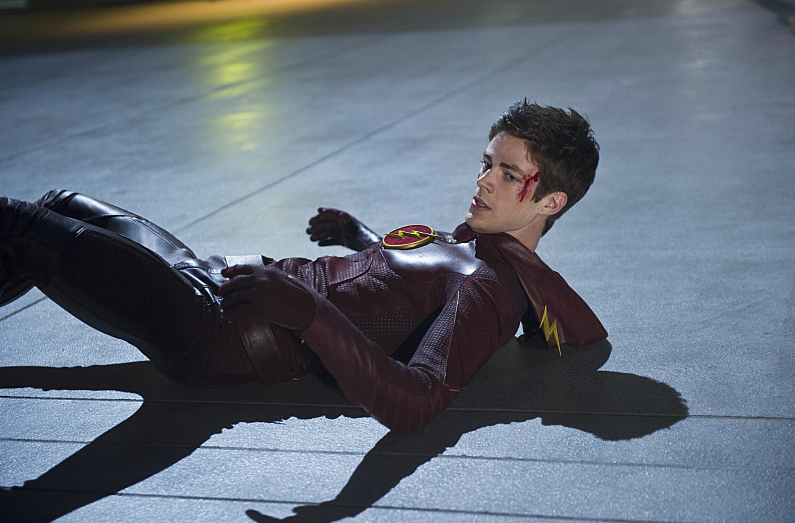 “The Man In The Yellow Suit” opens with holiday celebrations at the West household. But the Yuletide cheer is cut short when Captain West is called into the police department.

Once Barry and Iris are alone, they decide to open a few Christmas presents early. Barry gives Iris a replica of her mother’s wedding band, and Iris gives Barry a microscope. Any chance at romance is cut short though, when Eddie shows up and takes Iris to coffee.

At Jitters, Eddie mentions how he noticed that Barry seemed very disappointed by his arrival. He asks asks Iris if Barry has stronger feeling for Iris. Iris says no, so Eddie gives Iris her present early: A key to his apartment.

Across town, Snow sees Ronnie Raymond in STAR Labs’ parking garage. When she chases him, he bursts into flames before running out of her reach. Meanwhile, at Mercury Labs, STAR Labs’ chief rival, The Reverse Flash invades the facility and kills the guards. When Barry and the Central City Police arrive at the crime scene later, the witness describes the murderer as a blur in a yellow suit. Barry instantly links the description to his mother’s murderer, who also wore a yellow suit. When he tells this to Joe, Joe admits that The Reverse Flash has stalked him for weeks and threatened to kill Iris if Joe didn’t stop investigating Nora Allen’s death with Barry.

Barry and Joe go back to STAR Labs, where the Flash team discovers that Mercury Labs, led by Dr. Tina McGee, is researching Tachyon particles with a special device. They deduce that Reverse Flash was looking for the Tachyon device that Mercury invented, and decide to ask her if they can use it to bait him. Barry and Harrison Wells contact Dr. McGee and ask if they can use her Tachyon work for their investigation into the Reverse Flash. She refuses.

When Snow heads back to STAR Labs, she tells Cisco that she saw Ronnie. Cisco insists that it’s impossible, but Snow begs him to help her. Meanwhile, Barry sits alone in his Central City Police lab and takes an unpleasant trip down memory lane, to the night that Reverse Flash murdered his mother. Iris snaps him out of his recollection with a visit, and tells Barry that she is going to move in with Eddie. Barry is less than thrilled at the news, but denies that he feels weird about it. When Iris indirectly asks Barry if he’s romantically interested in her, Barry deflects and denies such feelings. Nice poker face, Allen.

Left to stew in his lonesome, Barry wanders the window of his office, where he sees Reverse Flash stalking him from a nearby rooftop. Barry chases Reverse Flash and asks why he killed his mother. Reverse Flash, who vibrates his face and vocal chord like Barry to protect his identity, smiles and says that if Barry wants to know the truth, he’ll have to catch him first. The chase is on. Reverse Flash leads Barry into a football stadium, where he proceeds to thrash the Scarlet Speedster. Reverse Flash acts like he knows Barry, claiming that Barry also knows him. As Reverse Flash puts, it they've been at this "for a long time." Revere Flash spares Flash however, and leaves him alive.

Back at Central City Police Department, Harrison Wells and Joe devise a plan to catch Reverse Flash with a containment field. They will use the Tachyon device as bait. With Joe’s position on the force, the team forces Dr. McGee to turn the Tachyon device over to Dr. Wells. As that occurs, Cisco and Snow track down Ronnie with a device that Cisco devised. The two find Ronnie, who says that he’s not Ronnie anymore—he’s Firestorm. He then creates a fireball and flees.

Barry and the team put the Tachyon device in the middle of STAR Labs to lure Reverse Flash. But Joe and Dr. Wells tell Barry that he must sit the mission out, since he is too close to the case. Barry argues that this fight is his. Joe insists. Frustrated, Barry storms out of the room.

The angry Barry visits his father, Henry Allen, in prison, and tells him that he found Nora’s killer, but failed to catch him. Barry apologizes for failing Henry and Nora, but Henry insists that it’s alright. Henry tells Barry that he must stop the investigation, saying that The Man In The Yellow Suit has already taken enough from Barry’s life.

Barry takes his Pops’ advice, and goes to visit Iris at the West household. He admits that he loves Iris—like, romantically. Barry says that he’s held a crush—or more than that—since childhood. Barry never admitted this, he says, because he was afraid the truth would scare her away. Iris is speechless. Barry uses the silence as an opportunity to leave, which probably wasn’t the smoothest move.

Reverse Flash breaks free of his prison, grabs Wells, and transports them back into the prison. With Eddie and Joe unable to help, Reverse Flash beats Wells to a pulp. The team is able to save Wells, just as the Flash shows up. Reverse Flash then gives Barry his second beatdown. He’s about to kill Barry, but Firestorm arrives just in time. Hurling a fireball at Reverse Flash, Firestorm scares him away. But before he takes off, Reverse Flash says it isn’t over between him and the Scarlet Speedster. When Snow tries engaging Ronnie, Ronnie tells her to never look for him again. Firestorm flies away.

As they recoup at Central City Police Department, Eddie ask Joe why Reverse Flash didn’t kill him. Joe explains to Eddie what metahumans are, and says that the two of them are the only ones on the police force who know of their existence. Eddie asks Joe if he knows the Flash’s secret identity. Joe doesn’t give it, and then goes to see Barry in his office. Barry admits that he’s been afraid of The Man In Yellow his whole life, which is why he lost in his fight against him. Joe cures the depression with some sentimentality though, saying that Barry’s presence has been a light in his and Iris’ lives. He tells Barry to never lose that light.

When Cisco and Snow patch up Dr. Wells, Dr. Wells says that he knows Ronnie is back and promises to bring him home.

With all the bad feelings out of the way, Barry, Iris, Eddie, Joe, Cisco, and Snow meet at the West household to drink some boozy eggnog. Barry tells Iris and Eddie that he is alright with their moving in together. In the other room, Cisco tells Joe that The Man In Yellow may have killed Nora Allen, but that he wasn’t alone in the murder. He knows this, he says, because the Flash and reverse Flash generated red and yellow lightning when they fought. The sight matches the red and yellow lightning that Barry said he saw on the night that Nora died.

Dr. Wells has a little Christmas celebration of his own back at STAR Labs. Busting out a ring with the Flash’s logo on it, Wells uses it to open a room with the The Reverse Flash’s costume inside. He puts the Tachyon device on the suit, and the, vibrating his vocal chord just like Reverse Flash did earlier in the episode, he wishes The Flash a Merry Christmas. While there’s still too many questions left hanging to say for certain, it sure looks like Dr. Harrison Wells is the indeed the Reverse Flash. On that note, we'll see you next year.

The Flash Recap With Spoilers: "The Man In The Yellow Suit"