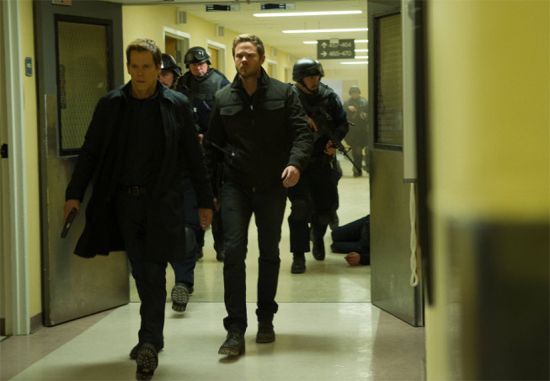 Fox has released five sneak previews of tonight's episode of The Following, which is called "Freedom." The first video showcases various scenes from the episode. In the second video, Ryan and Carrie's tender moment is interrupted. In the third video, Emma talks about being raised by a woman who told her every day that she was sick and ugly and a mistake. In the fourth video, Ryan assures Mike that they're both going to be okay. In the fifth video, the cast and crew of The Following share their thoughts on the "Freedom" episode. A deadly massacre, thought to be sparked by Joe Carroll, leads Ryan and Mike into very dangerous territory. But as more details are revealed, they realize another leader might be on the rise. Meanwhile, Joe continues to train the Korban cult and confirms his new plans with Emma and those who doubt him in the all-new "Freedom" episode of The Following. The Following cast includes Kevin Bacon as Ryan Hardy, James Purefoy as Joe Carroll, Shawn Ashmore as Agent Mike Weston, Valorie Curry as Emma Hill, Connie Nielsen as Lily Gray, Sam Underwood as Luke, Jessica Stroup as Max Hardy, and Tiffany Boone as Mandy Lang. Guest cast includes Shane McRae as Robert, Sprague Grayden as Carrie Cooke, John Lafayette as Captain Turner, Felix Solis as Agent Clarke, Tom Patrick Stephens as Decklan, and Florence Faivre as Serena . The "Freedom" episode of The Following airs on Monday, March 31, 2014 at 9 PM ET on Fox.