Even though Booster Gold is only in a few pages of last week's All-Star Western #21, he managed to have what looks like a big (if a bit predictable, thanks to solicitations) impact on the title's future--no pun intended.

Now, stranded in the present of the DC Universe and without Booster Gold to help him get home, Jonah Hex will face off against a variety of modern-day challenges in what's essentially a less-sci-fi version of the Hex series that once saw him trapped in the (then-futuristic) 21st Century.

Justin Gray, co-writer on the series, joined us for the last Gold Exchange (at least for now...?), but not the last time we'll talk about All-Star Western, certainly.

Remember that this is a spoiler-filled interview. If you haven't already read All-Star Western #21, buy it here and read along with us. 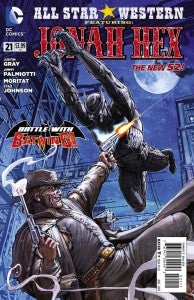 ComicBook.com: The five-page preview that went live a couple of days ago pretty much captures Booster Gold's involvement in this issue. Will we be seeing more of him sooner or later?

Gray: I think that is a fair assumption given the shared universe that was established with the New 52.

ComicBook.com: After all--they just recently had one of their members committed to Arkham!

Gray: I saw that. I hope she gets better soon I’ve always had a fondness for that character.

ComicBook.com: Obviously you and Jimmy are doing Batwing as well as All-Star. Was the stealth crossover a nice way of getting Batwing integrated into this story that's generated a lot of buzz for Hex?

Gray: We had gone back and forth with a few choices of who should be the first superhero to interact with Hex when he arrived in the future, but it was ultimately decided that Batwing be that character.

ComicBook.com: Hey! Where did those horses and the wagon go?

Gray: The back lot at Warners.

ComicBook.com: Also: I couldn't help but notice that in the repeated images of Jonah choking Booster, the "final" Booster we see appears to have reverted to his pre-Flashpoint costume. How much should we read into that?

Gray: I suppose you could read into it, but I think it was more a creative choice by Moritat.

ComicBook.com: I guess Hex is lucky that there aren't many places easier to break out of than Arkham, huh?

Gray: Can you imagine what would happen if inmates actually stayed in Arkham? There would have to be new villains invented or within a few years Batman would be down to chasing purse-snatchers and regular old criminals.

ComicBook.com: Are you guys going to have a little more fun with his "racially-insensitive costume" or will we see a slightly different look for Jonah going forward in the time-travel arc?

Gray: We’ve been toying with ideas regarding his appearance and what kinds of logical changes could be made and still have him stand out. There are other issues to be addressed such as the level of violence in the world and the fact that it is a future that may not suit Hex.

ComicBook.com: That didn't seem like QUITE the same DC Universe, did it? I mean, the Mutants there seem to suggest to me maybe the future is a little different here...

Gray: The mutants have been bleeding into the New 52 as was evident, I believe, in Batman Incorporated. I like that Jimmy and I had the opportunity to work in the mutants because you can have so much fun with their dialogue and names.

ComicBook.com: Are you guys looking forward to tackling the challenge of essentially reinventing Hex for a modern audience? I mean, that series was actually not bad but it's one of those concepts that many think is so self-evidently silly that it's not fondly remembered.

Gray: From a character perspective this is the same Hex from our first issue back in 2005. Yes the world around him changes but the man remains the same. Jimmy and I are very excited about the current direction and the possibilities we have in bringing Hex to the modern world.

What we’d ideally like to do is have him explore our present day and tell compelling fish out of water stories, then push him back through time with a few pit stops along the way. Jimmy and I have always wanted to have Hex fighting Nazis alongside Sgt. Rock. It's a wonderful dream. There’s no plan to make it happen right now, but you can imagine moving Hex through time for a few issues could yield some really incredible moments.

And then it would be great to bring him back to the old west and tell some single-issue stories, real spaghetti western stuff. These are all things we’d love to do, but right now our focus is as it has always been, to tell the best stories month to month and hope the sales can keep us in the game.

The Gold Exchange: All-Star Western #21 And the Back Lot at Warners

Call of Duty: Warzone Zombie Royale: Special Abilities, Supply Boxes, and How It All Works