In the second installment of our very special, Old West version of The Gold Exchange, Justin Gray once again joins ComicBook.com to talk about Booster Gold's trip to the past, where he's met up with Jonah Hex. At the start of the issue, they're searching for the Hootkins Gang, responsible for some serious damage last month.

But that search takes an unexpected turn...

Remember that these columns are meant as essentially a "commentary track" for readers who have already picked up the title, so spoilers are ON. If you haven't read it yet, why not buy one and read along with us? 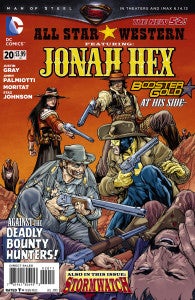 ComicBook.com: You spent a chunk of time in #19 building up the Hootkins Gang as formidable. Was dispensing with them in the way you did about setting up the next bad guys as EVEN WORSE or was it more about subverting reader expectations a little?

Justin Gray: A little of both. I think if you approach All-Star Western from the perspective of it being in the superhero genre, even though there is a superhero in the book at present, then you’ll find that things aren’t as neatly packaged. With the Hootkins gang it displays how in Jonah’s world, a seemingly big fish can suddenly be eaten by an even bigger fish. The Hootkins gang, for all their bluster, were simply thugs who liked to shoot people and blow shit up. Romeo and Damita have a different view of the world. There is escapism, but Jimmy and I like adding some of the unpredictability of life to stories involving Jonah Hex.

ComicBook.com: You've talked in interviews about the idea that Booster is the only "real" hero in the book, and we start to see some of that in a big way this month. After having spent so much time with Jonah, was it fun to juxtapose him with that?

Gray: It is always fun when we have the freedom to show familiar characters in different lights, while still preserving the integrity of that character. Booster is a hero we know that because we’ve seen him fight costumed villains, but there’s more to heroism and that what we wanted to show. 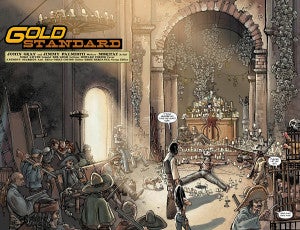 ComicBook.com: Is a real explanation for what the heck is up with Booster forthcoming? It seems weird to me that he remembers Blazing Saddles and yoga pants, but not how his force field and flight ring work. Almost like the missing information was strategic...

Gray: I’d imagine based on his return that there will be an explanation, however that’s not our story to tell. For me on a creative level and as a fan it is fun to me that there exists a universe where there can be random or seemingly random events contained within the very clear machinations of larger storytelling. With All-Star there’s this sense of, I guess the random insanity of the first Hangover movie. Instead of a bunch of guys getting sucked into the world of Las Vegas, they get sucked into the world of Jonah Hex’s and the ride is often more important and exciting than the destination.

ComicBook.com: This is the first time in recent memory that anyone but Hi-Fi has colored Booster Gold, and Atiyeh's style is very different. Did you guys have a lot of talk about how the "look" of that character could be made to fit in the world of Jonah? 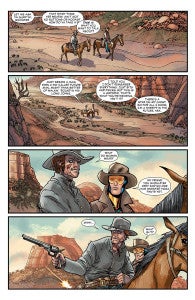 Gray: Moritat and Michael work very closely on the color process, Jimmy has an incredible eye and understanding of both color and the process of coloring for comics. Mostly I just sit back and make sure Jonah’s hair is the same color or scream about how I want the blood to be as red as a 70’s Italian film.

ComicBook.com: Can I just say that you guys have, historically, been the only non-Steinbeck place I've ever read the word "sumpin"?

Gray: My work here is done.

ComicBook.com: Is Arkham's book something you plan on following up on in the future?

ComicBook.com: In terms of pacing, was breaking up the "shut up" from the rest of the dialogue in that splash just about calling attention to the smoke plume, or something more?

Gray: Booster was rambling and Hex, well let’s just agree he’s no conversationalist. I can imagine the horror of Hex being locked in a room with Booster and Bat Lash. That would not go well. 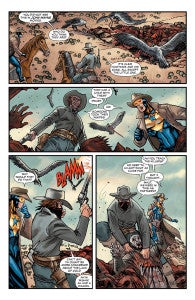 ComicBook.com: On that same note, Booster mentions the dwarf in the cage and then moves right on past it, only to circle back and have it be an interesting piece of information. Was there a particular reason that dialogue had to be set up that way?

Gray: It is funny, well not funny but, you’ll notice how certain writer/directors have a tone and rhythm to their dialogue or how Bogart’s era speaks very different from people in exploitation films. Sometimes to cadence of our dialogue has a difficult time on the page. Booster is absorbing information at different speeds.

ComicBook.com: Can I just say that Damita didn't get all that far into the scarring process before they both lost interest?

Gray: Believe me if we could have spent three pages on them having sex and her cutting him on camera it would be in there. Instead you’ll have to settle for them being so drunk that they passed out not long into it.

ComicBook.com: Booster's a nicer guy than I am. I don't know that I would have released the dwarf at all after all that nonsense.

Gray: Yeah, I’m with you, but that’s why Booster Gold is a hero and Jonah Hex collects human heads in exchange for money to buy whiskey.

ComicBook.com: There's a bit more of an Old West approach to Booster's civil liberties ethic expressed there: "You're crazy. You shouldn't be allowed to own guns or gather in large groups...".

Gray: I would tend to think this dialogue over guns and gun control is much older than most people would like to admit. Anyway, that was intended to be a humorous kind of nod to early Woody Allen movies.

ComicBook.com: Since you guys have made it no secret Booster is going to take Jonah to the present/Jonah's future, setting these guys up as a threat in the third part of the story kind of begs the question: What implications does that have? If they follow Booster and Jonah to the future, that can mess things up. If they don't, and are left behind to have their way with Booster's adopted town, that's equally troubling.

Gray: In an attempt to channel Matt Smith’s Doctor Who I give you the following and playfully snarky response: I see you’re anticipating possible plot courses. I’d advise against that. That’s the funny thing about time travel. Nothing ever truly happens in a straight line. Straight lines are boring. I’ll take a nice wavy line or some loopty loops any day.