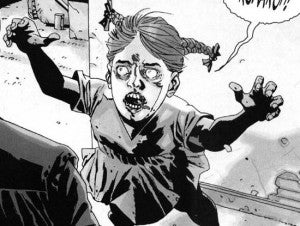 In this week’s Entertainment Weekly, there is a huge article on The Walking Dead, which includes interviews with cast members and producers. One thing that fans of The Walking Dead comic book have been wondering is exactly how many of the Woodbury residents from the comics would make it onto the TV show. In what could potentially be a major spoiler for The Walking Dead Season 3, EW asked producer Glenn Mazzara about Penny.

As comic book readers know, Penny Blake is the daughter of Phillip Blake and the niece of Brian Blake (a.k.a. The Governor). In an attack by marauders, Penny is killed by a shotgun blast, and she rises from the dead as a zombie. In part of the storyline from the comics, The Governor kept Penny leashed up in his apartment, where he fed her human body parts.

When asked about The Governor’s niece Penny, Mazzara said, ““There are key moments in the comic book that we felt were very important to adapt into the series. I don’t want to give anything away, but our version of the Governor is recognizable to comic book fans.”

It's the Great Pumpkin, Charlie Brown Getting Pumpkin-Shaped Vinyl Release