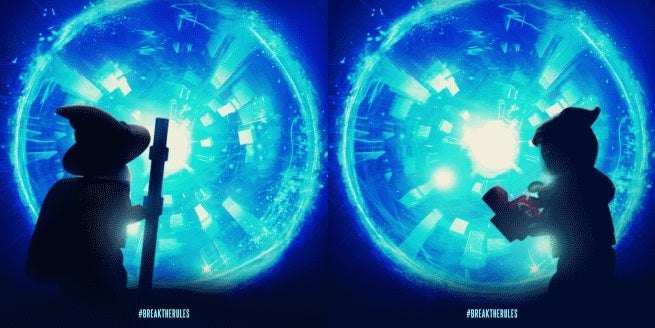 It looks like the worlds of The LEGO Movie and The Hobbit movies are about to collide. Both franchises are teasing a big announcement this Thursday, and they seem to be connected.

The Hobbit twitter account released the first tease, showing a LEGO Gandalf standing in front of what looks like a portal. The status reads “We're looking for someone to share in an adventure,” and has the hashtag #BreakTheRules.

3 Days. We're looking for someone to share in an adventure. #BreakTheRules pic.twitter.com/uI2m7vKXmT

Today, The LEGO Movie followed up on Facebook with a similar image, shoing Wyldstyle in front of the same kind of portal, with the same #BreakTheRules hashtag. Their status reads “It'll be like Taco Tuesday... but on a Thursday.”

2 Days. It'll be like Taco Tuesday... but on a Thursday. #BreakTheRules

Are they teasing a big role for Gandalf, or maybe other Hobbit character, in the second LEGO Movie? Gandalf made a cameo appearance in the first film, but maybe he’s set to get a promotion since Batman is going to be busy with his own LEGO spinoff movie.

It’s worth noting that there’s still one more day before the announcement, so maybe we’ll get another teaser image with another a clue – and perhaps a whole additional universe.

The LEGO Movie sequel is expected to release in 2018.