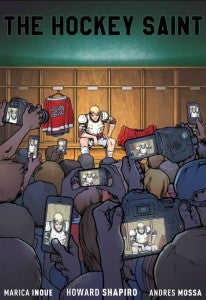 Howard Shapiro, author of a number of young reader novels including Hockey Player For Life, announced today that he will release a sequel to his graphic novel The Stereotypical Freaks, titled The Hockey Saint, which is scheduled for release one year from today. The book will feature art by Marica Inoue and Andres Mossa. You can check out the cover at right and the official synopsis below.

Twenty-one year old Jeremiah Jacobson is the world's best hockey player, but he wasn't prepared for the frenzy and scrutiny that came with that title. Tom Leonard is an average college sophomore... just a guy trying to find his place in the world as he sorts through issues that are both very real and seemingly insurmountable. Through a chance meeting, these two strike up an unlikely friendship. Their bond is tested when Tom discovers that his idol isn't as perfect up close as he seems from afar. With Jeremiah living a little too much in the moment and with his past catching up to him, will Tom be able to help him before it's too late? From the author of the critically acclaimed "The Stereotypical Freaks", comes its sequel, "The Hockey Saint (Bittersweet Rage)" a graphic novel about friendship, fame, and what we sacrifice for ambition and success.

The Hockey Saint, Sequel To The Stereotypical Freaks, Coming September 10, 2014