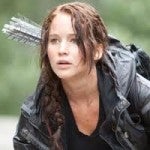 With a little more than two weeks to go until the opening of "The Hunger Games" in theaters, fans are barely able to contain themselves.  Luckily for them, Lionsgate released a new clip via Yahoo! today.  The clip features Katniss (Jennifer Lawrence) and Cinna (Lenny Kravitz), Katniss's head stylist. It takes place prior to the opening ceremonies of the Games, when Cinna shows a little hint of his dissatisfaction with the entire charade called the Hunger Games.

Looking for a word to describe what you just watched?  How about "WOW?"  Because that's what I said to myself after watching the portrayal of Cinna by Kravitz.  Unlike some, I wasn't down on Kravitz playing the role.  But I wasn't too high about it either.  I thought--let's wait and see.  And my oh my, if this clip is any indication, Kravitz has nailed the role. "The Hunger Games" is based on the Suzanne Collins bestselling book of the same name.  It hits theaters March 23.