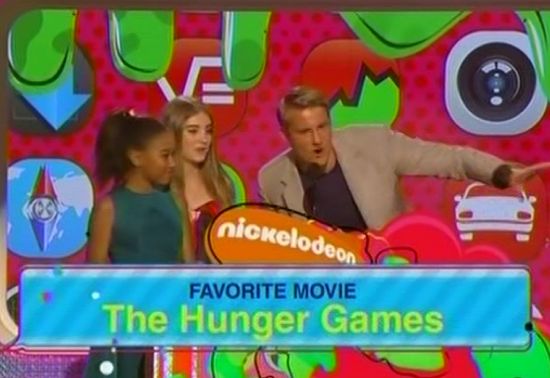 At the 2013 Kids’ Choice Awards, two superhero movies made the cut in the favorite movie category. The Favorite Movie nominees were The Amazing Spider-Man, Marvel’s The Avengers, Diary of a Wimpy Kid: Dog Days, and The Hunger Games.

The winner of the Kids’ Choice Award for Favorite Movie was The Hunger Games. Accepting the award for The Hunger Games were Willow Shields, Alexander Ludwig, and Amanda Stenberg.

Alexander Ludwig said, “We just want to thank all the amazing fans of the book and the movie, and everyone who voted, thank you guys so much, and Nickelodeon it means the world.”

Willow Shields said, “We also want to thank Gary Ross who created one of the most amazing movies and of course Suzanne Collins who created such an incredible book series, and she is so amazing, and we definitely want to thank her.”

Amanda Stenberg said, “And of course we have to thank Lionsgate for putting together such an amazing production and the crew and the cast, we love you guys, and we’re so glad we got to share this experience with you.”