In case the headline wasn't enough of a giveaway, this is an opinion piece. 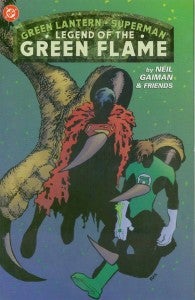 What would fans think of a Justice League movie with Frank Miller's name attached? Since the question was posed for the first time yesterday, there have been hundreds of responses from around the comics Internet.There's not necessarily a collective agreement on how fans might react, with some saying it's the only way to go and others pointing at the disaster of The Spirit to suggest Miller should never again darken Hollywood's door (and of course, everything in between).

Our feeling, though, is best summed up by someone who's had more experience with some of those "obscure characters...related to the League" that were reportedly of interest to some supposed Warner Brothers representatives spotted at a comics retailer asking questions:

And he's right, of course. A Frank Miller-written adaptation of Justice League would be a disaster. He's a writer way past his prime, who never had much of a grasp on most of those characters anyway and who has never been able to write Superman at all. His disdain for any superhero characters who rise above the street level vigilantes he's most comfortable writing comes through in his work--and while in print, it just frustrates some Green Lantern fans or something, on film it could color public perception of the characters permanently.

"I have yet to see any project that Miller is associated with that shows he has any grasp of Superman," said Jared Rascher, a ComicBook.com reader who chimed in on our Google+ page. "The character, in his hands, is always the target of derision and the contrast by which Batman is made to look superior.  I love Batman, but you can't do a Justice League movie without having a grasp of the other characters in the group."

Miller is not the only writer who struggles with issues like that--even incredibly talented writers can sometimes fail to grasp what makes these superhero characters work, in part because some believe that because The Dark Knight Returns and Watchmen are the two greatest works in the genre means that everyone else ought to be emulating them.

It's possible, one supposes, that a talented storyteller like Miller could be used to good effect if the situation was right. But that's where there's a challenge: it's been said by many fans and critics that the reason Marvel has been able to capitalize on the massive success of the superhero film craze and Warner Brothers have not is simple: Disney and Marvel understand what it is they have.

Warner's approach, the argument goes, seems to be to just throw big names at projects and hope that people show up without really worrying about the quality of the output, and certainly without worrying about coddling comic book fans, a small enough group that they can't support a movie on their own.

Marvel, on the other hand, seems to understand that comic book fans are alpha consumers--they'll see the film a dozen times and buy the Blu-ray, and along the way they'll preach the gospel to their friends and family, blog about it and take their case to social media. The 200,000 or however many people it is that shop at a comic shop every month actually have a reach of millions in terms of who's listening to them talk online.

Furthermore, those people have a relationship with these characters. Fans want to like the new Spider-Man movie, so if you make it good, they'll like it even if it isn't perfect, assuming that you've treated the material with respect.

And treating it with respect doesn't necessarily mean turning it into ultra-violent, sexed-up neo-noir, which is really Miller's forte.

Why wouldn't Frank Miller on a Justice League film work? Look to The Spirit; Miller attempted to adapt a character who didn't fit his typical mold, and failed. The film was a mess, it lost a ton of money, and the average moviegoer will never have any idea how good Will Eisner's work on the series was.

Why won't Frank Miller on a Justice League film work? Because All-Star Batman and Robin the Boy Wonder was so terrible that it erased decades of goodwill among many fans, and served as evidence that Miller had no business writing Green Lantern.

Why might Frank Miller on a Justice League film work? Let's look to Facebook, where a creator recently lobbed the following piece of sarcasm at ComicBook.com's Senior Staff Writer Russ Burlingame: "Because 'I'm all growed up and i want my comic heroes to be all adult and dsysfunctional and mature!' has worked so well...meh."

The Justice League By Frank Miller Would Be A Disaster