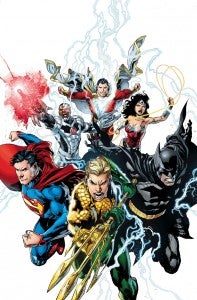 Up until now, the prospect of a Justice League film--something that many fans want to see but about that many are extremely skeptical can be done right--has been little more than a vague notion, a pipe dream that seemed unlikely to ever come to fruition.

Today, though, someone apparently affiliated with Warner Brothers told the Los Angeles Times that the film will start shooting next summer in order to hit the rumored 2015 release date that would put it up against Marvel's Untitled Avengers Sequel in an epic showdown of super-team movies.

In other words, things just got real.

The idea of a Warner rep going to the mainstream press and giving dates for the production and release more or less puts the studio in the position where they have to make the movie, or they'll look foolish. The fact that they've been mostly unable to capitalize on their DC properties while Marvel bolsters their bottom line with Marvel content has already had the effect of making Warner look pretty foolish, so going the extra mile in that regard is probably not something anyone wants.

And there's a lot to consider before the film can get underway. Rumor has it that they want to establish a cinematic universe, not unlike what Marvel has, but Marvel is connecting their movies with TV properties like Marvel's S.H.I.E.L.D. and a potential Incredible Hulk series. DC's TV presence right now is limited to Arrow and the suddenly-missing DC Nation block on Cartoon Network, which rumor has it is on hiatus partially due to conflicts between DC Entertainment and the Warner-owned Cartoon Network.

Arrow, meanwhile, is rumored to be bringing in Bruce Wayne at some point, something that's unlikely to connect to the movie universe becuase it's hard to imagine anyone coming to The CW Network to get their start on a major summer tentpole franchise, let alone two if they decide that the Batman films and the Justice League films are to be interconnected. 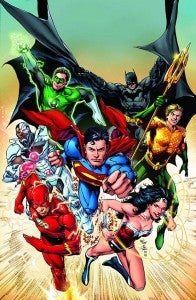 Of course, another rumor says they won't be, and that the Batman movies will get moving again as soon as possible, with a different lead and a different continuity from Justice League, probably to hedge bets against Justice League spontaneously combusting before it's ever released--or worse, being a Green Lantern-level disappointment.

If Batman is going to exist separately from Justice League, though, then what of Superman and Green Lantern? While it's unlikely we'll see Ryan Reynolds darken the doors of a DC Entertainment film again, that movie could be kept in continuity if they decided to replace Hal as the Green Lantern of Justice League.

Man of Steel certainly seems like the logical jumping-off point for the League, given that it's the first and greatest superhero and that his will be the last solo DC film before they theoretically start shooting Justice League...but if they're going to run Batman on a separate track, then why not Superman, too? That, of course, would mean that the Justice League director would have to re-cast Superman and, if Man of Steel is a success, do so with an actor who's appealing enough that he doesn't spend the whole time being compared to Henry Cavill.

Really, the "cinematic universe" approach makes a lot more sense, and to hell with playing it safe as far as Batman is concerned. If Justice League fails, why not just pretend it never happened and reboot Batman from there? To have two Supermans and at least to Batmans floating around will just confuse and frustrate viewers, and to piecemeal it would make even less sense.

Should this movie fall through now, after it's been reported by the mainstream press with specific details attached--or worse, if it's made and it doesn't make a minimum of $1 billion--it could be catastrophic for Warner and for DC Entertainment in the short term. Certainly it would likely lead to a straining of ties between DC management and the film division--ties that are likely already not the strongest given the commercial failures of Jonah Hex and Green Lantern in the recent past.

And all of that fails to even account for the fact that Warner Brothers needs tent pole movies in a big way; without Christopher Nolan's Batman films, the recently-concluded Harry Potter franchise or the about-to-be-completed Tolkien material, the studio finds itself, for the first time in a decade or so, stuck without any big franchises that's a guaranteed hit every year or three.

This movie needs to get made, and it needs to be good.

The Justice League Movie: Why It Has to Happen Now