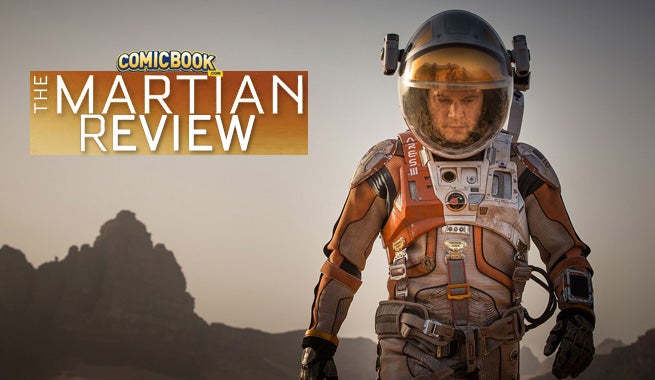 Sci-fi movies don't need to be big, explosive, action-packed thrillers to be intense, enjoyable films and Ridley Scott's The Martian is a testament to this fact.

Based on David Weir's novel, The Martian comes along and packs a whole lot of science into its 141 minutes of Gravity and Castaway's baby. Little time is wasted before Mark Watney (Matt Damon) is separated from his crew amid their trek on Mars. This means we have an ample amount of Watney being isolated on the Red Planet but through clever use of video diaries in the form of mounted GoPro cameras, Drew Goddard wrote a very watchable screenplay adaptation.

The Martian's opening act sets the bar at a grueling height as Damon fishes a piece of debris out of his stomach in a (quite literally) gut wrenching sequence. Never again does The Martian attain this amount of sheer brutality. Instead, we watch Watney tested in other, less painful ways which call on him to use his botany skills and other scientific knowledge to preserve his own life.

Through Watney's self-preservation comes a lot of sci-fi astronaut jargon which, no matter how accurate it is or isn't, comes off as if it were written and delivered by an astronaut mid-expedition. Watney's journey to declaring himself the best botanist on the planet is not without references to science the average citizen won't be able to correct. It enriches the plot and its environment exponentially and Damon never misses a beat when explaining to his video diaries (and the audience) exactly what he's is doing and neither do any of his co-stars.

Damon gets very little screen time with any of those co-stars as you would imagine. That's not to say Michael Pena can't steal the screen time he is given with another lovable performance and humor similar to his work in Ant-Man. He, Kate Mara, Sebastian Stan, and Jessica Chastain are all part of the Hermes crew which left Watney behind presuming him dead. In turn, they're charged with learning an immense amount of astronaut dialogue but it's the humor that rules supreme.

Rather than focus on a dark film about the desperate and lonely survival efforts, Goddard's screenplay and Ridley Scott's direction inject The Martian with appropriate amounts of humor right where we need it. Just when things are going good for Watney, they go bad and it's absolutely heart-wrenching despite being expected, but the humor (which always follows) reminds us if Watney is making the best of it, we should, too. The Martian could have probably used a hint more emotion during its climactic scenes to set itself apart and rise above previous space operas but it settles by claiming a spot amongst some of the best rather than surpassing any of them.

What makes The Martian different from Gravity and Interstellar, aside from its witty humor, is its politics. Back on Earth, NASA honchos Teddy Sanders (Jeff Daniels), Chiwetel Ejiofor (Vincent Kapoor) and Annie Montrose (Kristen Wiig) debate how to handle the revelation of Watney's being alive and what course of action will be best to save him. The necessary trips back to Earth offer insight to the audience Watney isn't getting, adding to the already tense hope of his return.

The Martian is a testament to human will and ingenuity. Where movies like Tomorrowland failed while trying to inspire people to be creative and resourceful, The Martian excels, and never does it feel like it is throwing a NASA public service message at you. We're watching an astronaut struggle to survive and he's doing it almost entirely on his own. Nothing looks like fun yet Scott still positions it to be inspirational. We're watching the best minds in the world come together and unite nations in efforts and hopes to bring home one human being.

To not compliment the landscape and visuals offered in this film would be a mistake. Shot in Hungary, the Mars landscape is presented in awe-inspiring fashion. Not that I've been to Mars or know what its surface truly looks like, but Scott's presentation of the planet appears flawlessly on screen. That's not to mention the added, subtle visuals to be appreciated such as Mara running on a treadmill aboard the Hermes as it rotates amidst the stars with Stan looking on from the outside. It's puzzling, trying to imagine how scenes like that which come together.

For a movie taking 21 small steps into two-hour territory, The Martian keeps its audience's attention for the entirety of its journey. 141 minutes is a small price to pay for a saga which takes places over multiple years. Like its main character, it never falls flat or gives up. The lonely space drama is carried through Damon's hearty performance and appropriately broken up by Earth's politics and efforts to bring him home.

Bottom Line: The Martian consumes audiences from start to finish. Damon's witty performance makes the film both fun and intense while Scott's balance of Mars, Earth, emotion, politics, science and humor is an impressive and enthralling feat. 8.4/10