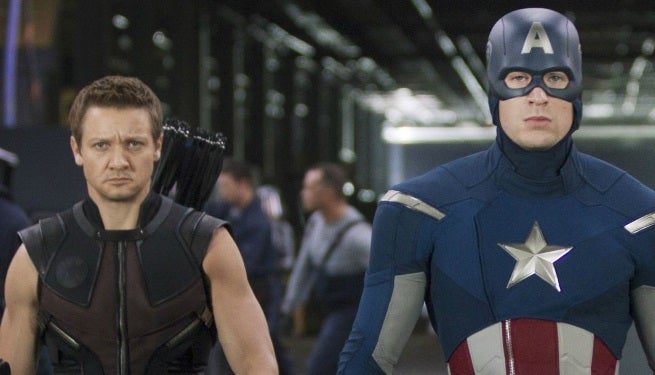 It seems like Jeremy Renner's schedule is all that stood between Hawkeye and, finally, a really good demonstration of what the character might do for the MCU. Captain America: The Winter Soldier directors Joe and Anthony Russo were speaking to Screen Rant on the occasion of the film's DVD and Blu-ray release, when they detailed a planned face-off between Cap and Hawkeye that, ultimately, turned out to be a little more complex. This would have been shot for Winter Soldier except for "a conflict with Renner’s schedule."

"We were trying to complicate the relationship between Cap and his SHIELD agent friends," explained Joe, "If Hawkeye got a call from SHIELD saying Captain America is a fugitive, would he listen to that call or not listen to that call?"

As it happened, he'd listen to the call, but not necessarily take the orders on face value.

Joe went on. "There was an awesome sequence where they confronted each other in a ravine on the outskirts of D.C. and Hawkeye was shooting a series of arrows closing in on Cap, Cap closing in on him. And then Cap took him down and he realized for the first time that Hawkeye was trying to trick SHIELD, where he whispered something into Cap’s ear that Cap had a tracker on his suit and to punch Hawkeye to make it look real, because there was a Quinjet hovering above where they were watching the feedback back at SHIELD."

It's a shame, I think, that Hawkeye didn't get this moment to be heroic. We'll have to wait until at least The Age of Ultron and hopefully not any longer. For Renner's sake I hope he gets something more to do with the character soon; I remember his palpable disappointment at being 'possessed' in The Avengers.

The Winter Soldier is released to DVD and Blu-ray in the USA next Tuesday but if you don't care about actual discs and boxes and things you can download the thing now from iTunes, Disney Movies Anywhere and just about everywhere else.