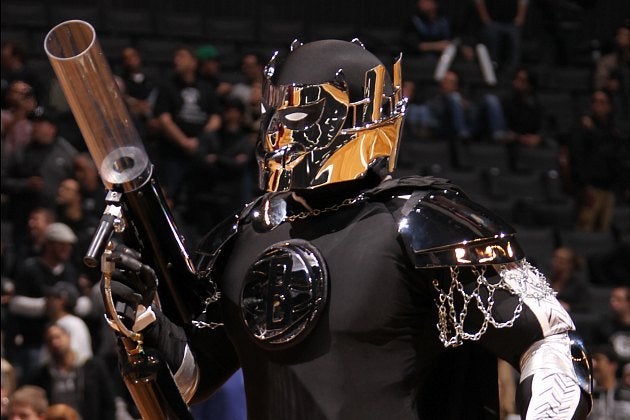 When the NBA Finals start on Thursday, viewers will have an epic match-up on their hands. It's East vs. West. It's Lebron James vs. Stephen Curry. It's Cleveland's Cavaliers vs. The Golden State's Warriors.

And the showdown isn't too dissimilar to Marvel vs. DC. Indeed, there's talent on both sides. There are characters with colorful personas like "The King" and "The Splash Brothers." There have been epic comebacks, tired defeats, and outright dominations. In the world of comic books, these are the moments, and traits, of heroes. And in the NBA, stars can become superheroes in their own right, inspiring cities and legions of fans.

Fortunately, we don't have to just tell you all this, because the worlds of NBA basketball and comic books have…crossed over… (think about it – it's a pun that works on both levels) more than once. Below, we get in the paint with comics and the NBA's greatest team-ups. 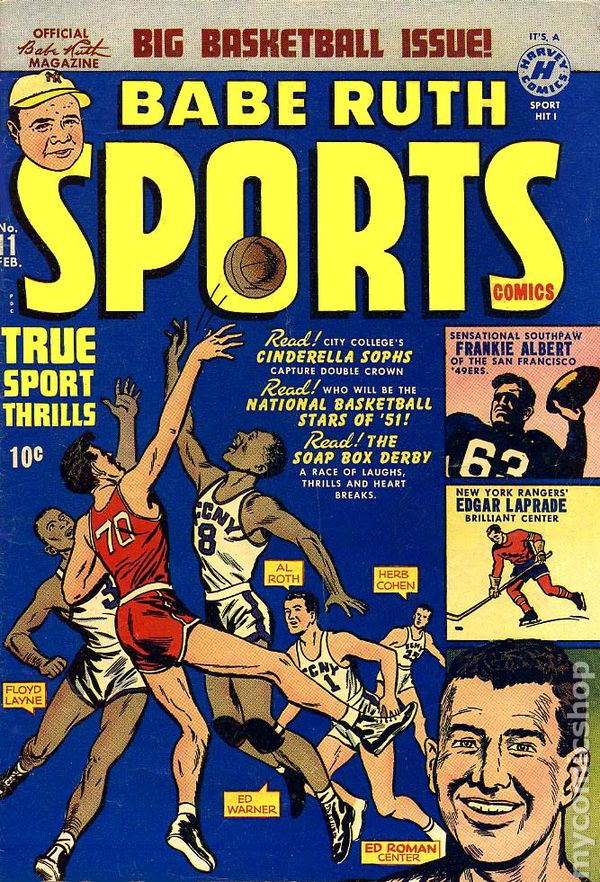 In 1951, the NBA wasn't quite what it is today, but it was already seeing the pages of comic books. Indeed, in Babe Ruth Sports Comics (it was a different age of comic books, when things were very obviously named), all sports, not just baseball were featured. The final issue of the series was the "Big Basketball Issue." This is the most factual, least fantastic, and surely the oldest comic on our list, but it shows that these two, the NBA and comic books, have a longstanding and close connection. 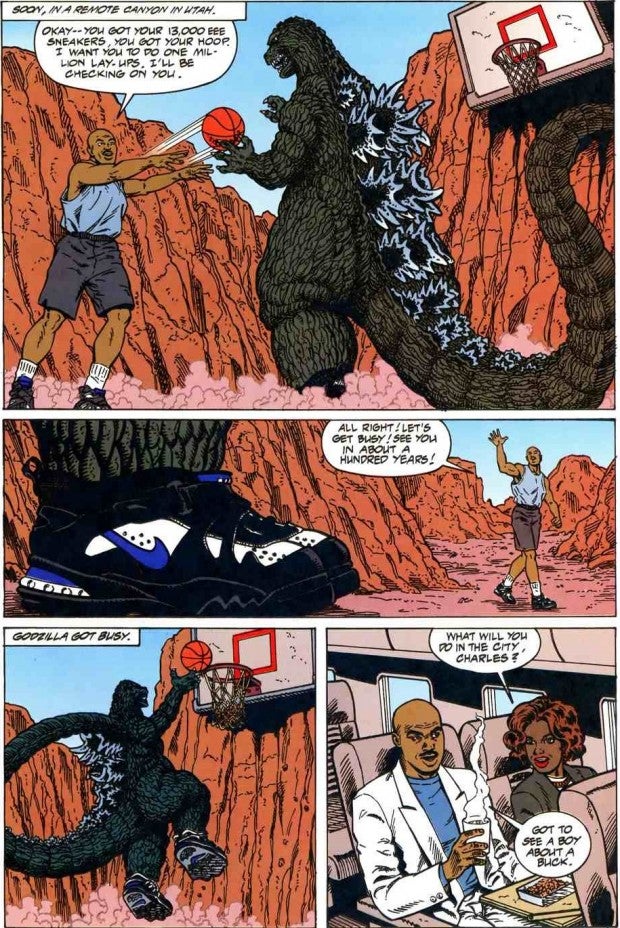 Our thanks to Comics Should Be Good on archiving this one for us, as we jump forward in time to 1992, and a Dark Horse Comic from Mike Baron and Jeff Butler. It is, exactly as the title states, a basketball battle between Sir Charles and the King of the Monsters. In the pages of the comic, Charles Barkley becomes a giant because why not and Godzilla puts on a pair of Nikes and shows off his Mikan Drill with a mean layup. COMICS SHOULD DO THIS SORT OF THING ALWAYS. 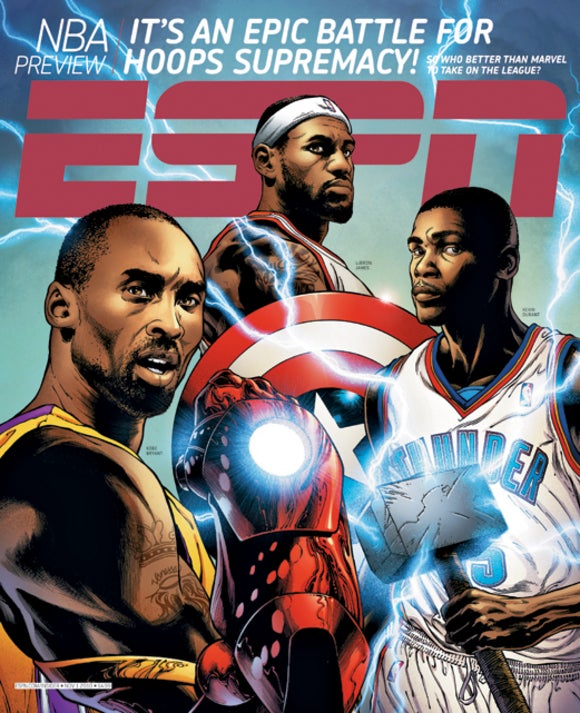 Ah, corporate synergy – is there anything better? For the NBA Preview issue of ESPN the Magazine in 2010, newish member of the family Marvel Comics was brought on to cover the magazine, featuring Kobe Bryant as Iron man, Lebron James as Captain America, and Kevin Durant bringing the (chuckle) thunder as Thor.

The cover, by Joe Quesada, Danny Miki, and Richard Isanove, was just the tip of the iceberg, though. For every team's entry in the preview issue, artists like Sal Larocca, Mike Deodato, Jr., Greg Land, Alex Maleev, John Romita, Jr., Leinil Francis Yu, and more, created unique Marvel-NBA mash-ups. It went from the flattering, like the Celtics "Fantastic Five" to the not-so much, the "Unamazing Cavaliers" showing Lebron walking away from the team (um, he came back. Spoiler alert). It was a fun use of the relationship between these Disney sister-companies. 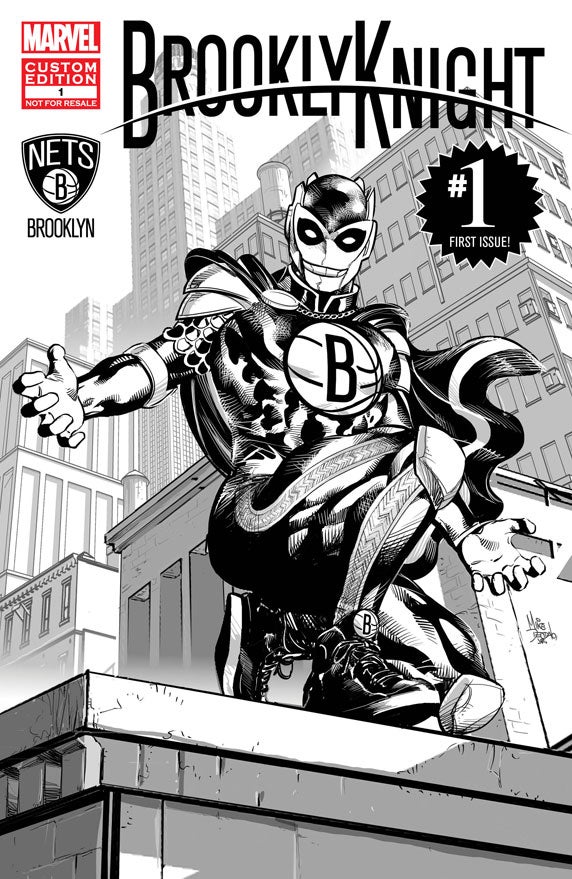 Yes, that is a terrible name – with the two words merged? Thank you, terrible focus groups.

I digress, in 2012, Marvel and the newly Brooklyn Nets (they were in New Jersey, then Jay-Z happened) had their own exclusive teamup, creating the BrooklyKnight to represent the team, because a walking, talking Net would not be very exciting. Believe it or not, a comic book written by Jason Aaron (yes, the Thor and Star Wars writer) and drawn by Mike Deodato, Jr. was also produced, mostly to be given out at the Nets new home of the Barclays Center. You see, BrooklyKnight was supposed to be a play on the term "Brooklynite" meaning a Brooklyn native, but with a Knight. As of July 10, 2014, the Knight was retired, because, well, people hated him – kids, adults, men, women, they hated him, hated him, hated him. But Benny the Bull doesn't have a comic written by Jason Aaron in his back pocket, now does he? (But he still exists.)

LeBron: King of the Rings 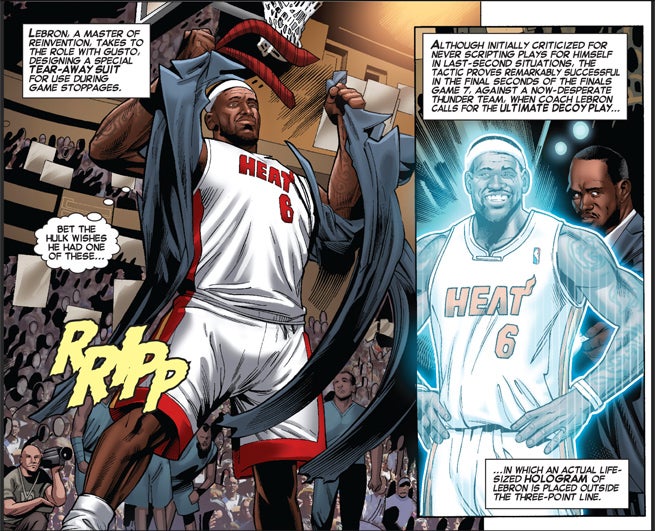 Yup, ESPN and Marvel teamed up more than once (and guess what, they probably will again!), in 2012 for a LeBron branded book called King of the Rings. This digital one-shot includes LeBron facing off a Shane Battier who is undead, a Russell Westbrook with a robot arm, and an "Old Man Logan" take on the King himself. It, once again, teamed up some high profile Marvel talent like Christos Gage, Mike Deodato, and Terry Dodson, but didn't exactly inspire any of them to change their careers to an NBA focus.

This does have the distinction of being a full story you can still read for free online. So, you go do that. We'll wait.

DC Comics Joins the Fray with Inside the NBA 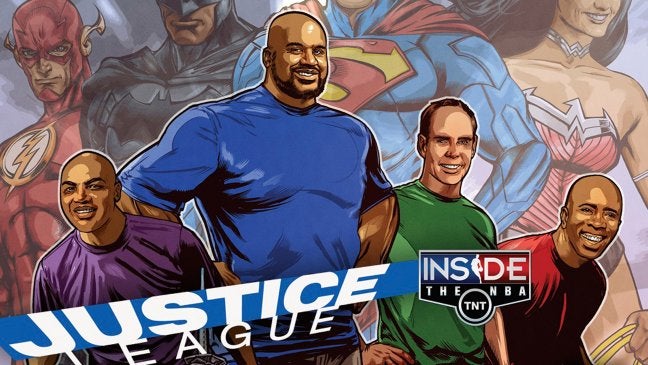 You didn't think DC Comics would stay on the bench, did you? Earlier this very year, the comic book company did some corporate synergy of their own, teaming with fellow Warner property TNT for a comic book that put the hosts of "Inside the NBA" alongside the Justice League. Yes, you finally got that Shaquille O'Neal and Superman team-up you always wanted. You had the opportunity to see Kenny Smith and Wonder Woman share a comic book page. How did you miss this gem?

But c'mon--The Flash carries Charles Barkley on his back while running across the East River. PLEASE GO READ THIS NOW.

Good luck to the Warriors and the Cavaliers – what's your favorite NBA/Comic Book memory?

Nathan's Hot Dog Eating Contest: What Time It Starts and How to Watch Online