We aren't going to spend a ton of time looking at the Week 2 and Week 3 titles, in the way that we did at the beginning of the month. Still, it's worth checking in to see how DC's books are doing a year after the relaunch and to what extent the zero issues have played a role in helping to redefine the characters at their heart.

Beautiful art, nicely paced, with a predictable but perfectly serviceable plot. Her first appearance in the Batgirl costume is cleverly done and memorable.

Way too much exposition. It always feels like a crutch when you've got that many thought/inner monologue panels.

Once again we've got the big male antagonist making very thinly veiled sexual advances on our heroine. This has kicked up a ton of controversy lately and I have to wonder whether it might have annoyed some people a little bit more if it weren't Gail Simone writing this issue.

It's unlikely, of course, that anybody ever said that they wanted to see Batman's origin rehashed anytime in our lifetime.

Snyder and Capullo are great--they are becoming to Batman what Geoff Johns has become to Green Lantern--indispensible, and the top guys in a field of talent that includes some pretty respectable also-rans.

Still, the story itself is pretty boilerplate, just setting up for what's going to come in Death of the Family. So is James Tynion IV's backup feature--setup, I mean. It's certainly not boilerplate; rather, it's a a charming little tale that sees the way Batman impacted each member of his "family" in the earliest days of his career. It's a clever and touching little vignette that makes me eager to see what Tynion will do given a little breathing room in Talon.

I miss Tomasi and Gleason on Green Lantern Corps. There, Gleason's incredibly stylized artwork actually served the story, where on a non-cosmic book where he's drawing regular people it seems as often as not to detract from it.

There's a bit of a continuity gaffe here, too; Talia al Ghul is in possession of one of Bruce's cape-and-cowl apparatuses, presumably the one he left behind in the James O'Barr story where he and Talia first hooked up. But if Bruce was just putting together his ensemble in Batman #0 a little while ago, how can he have a teenage son (or at a minimum, I think he's been pegged at ten) who already had his costume before Bruce even did? It's minor but annoying, and frankly an issue that revolves around Damian is still likely to get more criticism from me because the character has never won me over.

It's Liefeld's final issue and good riddance to him on this title. The art is dull and lacks the kinetic life that generally makes his work appeal to a broad base of fans in spite of its technical flaws, and the story is just a retread of the kind of stuff we've seen in movies 100 times before.

The most interesting part of the whole issue was looking online to see what panels and page layouts he lifted wholesale from existing books, and trying to figure out whether Amanda Waller was heavier at some point in the history of the new DC Universe.

Lucifer Morningstar of Sandman fame appears here, establishing among many other things that The Sandman will likely take place in the same universe as the rest of the relaunched DC titles. Don't expect it to be a technical New 52 title, though; it's more likely going to be like The Shade.

Bernard Chang's work is beautiful on the Demon stuff, but when you get to the human side of the issue, it lacks something--especially given the beauty and scope that Diogenes Neves had brought to the first chunk of the book.

Matt Kindt has done well for himself, taking over this oddball and ingenious book from Jeff Lemire, arguably one of the great standout talents of the New 52.

This issue is a little bit more on the standard side than I would have hoped for, and it certainly seems--with all its gruesome imagery and focus on the reanimation of the dead that had to happen to bring Frank to life--well-suited to tie into the upcoming "Rotworld" crossover between this title, Swamp Thing and Animal Man.

Alberto Ponticelli's art seems to have been getting less polished and more sketchy and Vertigo-inspired every month. Generally that's been a loss, but this month it seems to have found some kind of equilibrium. and really looks good. It's bizarre and frantic and feral--all things that fit in with the feel of the issue and the gruesome stuff on display in a lot of these pages.

During Geoff Johns's run on Booster Gold, just prior to Flashpoint's reset of the DC Universe, there was an issue where Rip Hunter (the Time Master) suggested that Guy Gardner was the most important Green Lantern of all time, or something of that kind. There was a distinct sense that Johns was using this story, set in Guy's past and seeing him tackling a bad relationship with his father just before the old man's death, as a jumping-off point for something he wanted to do with the character...but he never got around to it.

There are a lot of similar threads being pulled here, and it will be interesting to see whether there's some big-picture story to be told with Guy, his past and his family that we haven't seen yet. I'm also vaguely curious to see whether his brother turns out to be Dementor, Guy's brother from the "Vuldarian warrior" phase of his life which now, apparently, no longer happened.

As an aside, am I the only one who noticed an odd moment where Guy, still in the hospital with his brother and long before he's written as gaining his GL logo and then customizing his costume, appears to be wearing his jacket and gloves? It's only the one panel but it sticks out.

It's been a while since Rob Liefeld took over Grifter, and it seems to have been a steady descent in quality. Certainly it's not a terrible book--and Scott Clark's pencils actually give it a little something extra that keeps it from seeming too awfully generic and boring--but it's nowhere near as exciting as it was under Nathan Edmonson.

It's also a lot less complex and textured, and going back to the past, to a time that seems oddly incompatible with #1, shines a light on that. Gone is the confusion and frustration of those early issues--the things that made Grifter an interesting and relatable character. Instead, we've got "Generic Bad-Ass #3," with a bunch of Team 7 references just so that fans reading this and Deathstroke can be certain to know the new title launching this week is IMPORTANT.

This is not some of artist Pete Woods's best work. His pencils have been a saving grace on this uneven title throughout the run, but this month something feels...off. Perhaps it's the amount of background work that you have to do, and the amount of new stuff you have to design or to get right when you're drawing the future, since obviously for the most part we haven't had a ton of flashback/flash-forwards.

The issue is full of exactly zero surprises, with a villain who's pretty basic and mustache-twirling, and Timber Wolf--a Legion fan favorite, to be sure--has never been a particularly strong draw for me. If I wanted to read Wolverine, after all, he's appearing in about thirty monthly Marvel titles.

Beast Boy and Terra take a lot of abuse in a story set in the days before a book that just launched about fifteen minutes ago. It's an odd choice, and frankly I'm not sure who the target audience for this title is. Churchill and Rapmund's art is as sharp as ever, but there's really only so much that you can do with third-tier characters and a writer who seems to be treading water. 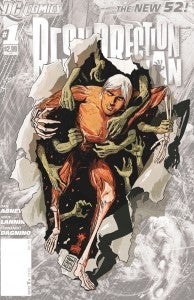 For the second time, Resurrection Man has been cancelled after a pretty short run...and for the second time, it's been a delight to read every month, and it's ended on a great note that both gives the character a sense of thematic closure and keeps the door open for more down the road.

Abnett and Lanning are some of the best in the business, and Resurrection Man is arguably one of the great achievements of their partnership, right along with things like Guardians of the Galaxy. If you weren't reading this title, you were missing out--buy it in trade and you will NOT regret it.

After a rocky start last year, few titles have improved more than Suicide Squad. It's been uneven, but always captivating and it's a great-looking book, to boot.

This issue feels a little like treading water, though, particularly as it revolves around Amanda Waller, who has already made an appearance in the (did we mention it's important) Team 7 part of Deathstroke this week. Waller, meanwhile, is frankly not all that interesting and her journey to the point where she decides to put together the Squad is pretty standard stuff. Frankly it  begs the question whether Adam Glass was just writing a story that treads water until he starts playing with the Joker cards.

This one is the opposite of Suicide Squad. If the Squad started out a bit weak and got better, Superboy started out one of the best new titles of the New 52 and has slowly become a real mess. It all comes full circle here, as they retcon elements of the first issue to make the story fit the flying-by-the-seat-of-its-pants narrative of the title.

The Superman family of titles is gearing up to spend quite a lot of time on Krypton, which may be a graceful exit point for those readers who are still stinging from the whole New Krypton debacle a couple of years back. That all begins here as the issue revisits the "clone wars" concept from the post-Crisis DC Universe.

And whatever happened to Lobdell's comments that this was the same old Kon-El with a new coat of paint? Instead Kon is a homicidal maniac who died with Krypton and Superboy has no connection to any of Superman's back story as far as anyone can tell.

If Jesus Merino's art looks decidedly different this month, it's because he's been paired with inker Norm Rapmund (he of Ian Churchill, Dan Jurgens and Brett Booth fame), probably to give this title a bit more of a commercial look than the inky sort that Merino's pencils often turn around. It looks terrific, and matches the subject matter well since this team was invented back in those heady days of WildStorm by a guy for whom crosshatching is a religious experience.

Justin Jordan is great, too. His tight pacing, well-written dialogue and curious characterization infuse this book with life, in spite of the fact that most readers don't know or care about many (if any) of the characters contained herein. This may be the best book of the week, which almost makes up for what seems like a silly amount of unofficial hype in the other books.