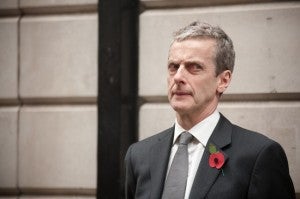 Peter Capaldi, the Academy Award-winning director best known for his role as Malcolm Tucker, a spin doctor in the BBC comedy series The Thick of It and its follow-up film In the Loop, has been named the Twelfth Doctor and the new star of Doctor Who following Matt Smith's departure. Capaldi, a longtime Who fan going back to the '70s, said that he downloaded old scripts and practiced in front of the mirror in order to prep for his audition, and said that one of the hardest parts was keeping the secret. Of course, the bookies already knew that he was tipped for the role, and Variety ran the story as "official" half an hour before he walked out onstage live on the BBC special. Smith will regenerate into Capaldi during the Christmas Special later this year--but not before he shares screen time with former Doctor David Tennant in the Fiftieth Anniversary Special. Capaldi, meanwhile, has already appeared on Doctor Who before, as well as in its spinoff Torchwood. You can check out a scene from each, featuring Capaldi, below. For some fans, this is quite a sticking point, and it will be interesting to see whether the BBC deals with the issue in-story. Of course, the Sixth Doctor was played by Colin Baker, who appeared in--and shot--the Fifth Doctor in "Arc of Infinity." The physical similarity was never addressed. Early on, one of the runners on tonight's BBC show recognized the new Doctor on sight, suggesting that he was a known actor and not a total neophyte. Some took this, too, to mean that the new Doctor was one of the names on most people's "lists." The program itself took a lot of heat on social media for being mostly filler. The first half an hour, after all, featured no real information and primarily focused on looking back at the character's history and teasing viewers. Previous doctors Smith and Peter Davison spoke with host Zoe Ball, as did a number of other British celebrities. Bernard Cribbins, who has appeared on the series before, was perhaps the most interesting element, saying that he interviewed for the role when Jon Pertwee was leaving. By the time showrunner Steven Moffat was onscreen, replete with hints of an older Doctor, the liveblogs at Doctor Who fansites and even British newspapers had become downright brutal. In 1995, Capaldi's short film Franz Kafka's It's a Wonderful Life won the Academy Award for Live Action Short Film. Most recently for American audiences, he appeared in World War Z--as a WHO Doctor (World Health Organization).

The New Doctor Who Star is Oscar-Winning Director Peter Capaldi