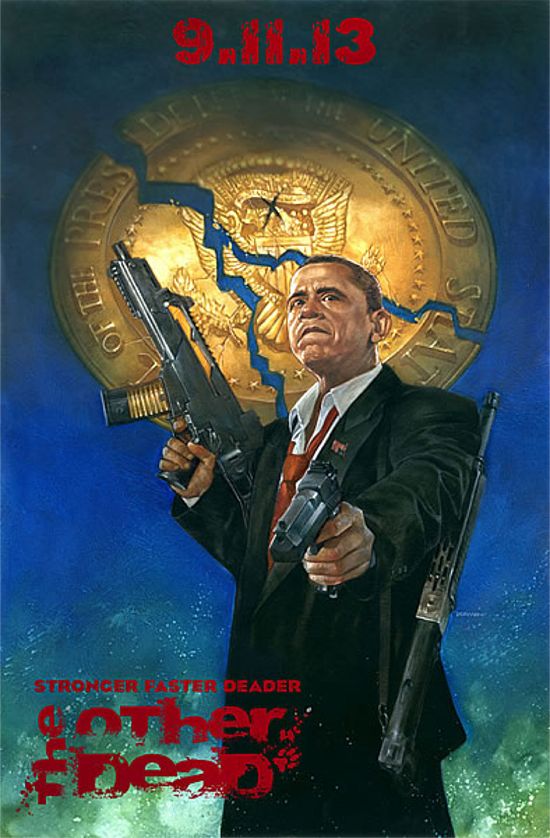 The Other Dead is a six-issue miniseries from IDW Publishing, which tells the story of every single member of the animal kingdom turning into zombies. As part of launching the series, The Other Dead #1 has a limited edition variant cover featuring a gun-toting President Barack Obama. In addition to being featured on the variant cover, President Obama is a central cast member in the story. The Other Dead #1 was slated to be released on 9/11, but the book is reportedly being held up in customs. The reason being given for the customs delay is "to spray for moths." Dave Dorman is the artist on the President Obama variant cover, and he fells the timing of the delay is suspicious with the President currently considering military action against Syria. "At first I thought Customs said they were spraying for Mothra, which was ironic since the books were being held up in Asia, and this is a sci-fi horror comic about deadly creatures," quipped Dorman. "But the timing of this delay is suspect." The Other Dead creators are Joshua Ortega (Gears of War), Digger T. Mesch (Art Asylum, Mini Mates), Kevin Eastman (Teenage Mutant Ninja Turtles, Heavy Metal).  Because of the customs delay, it is unsure at this point as to when The Other Dead #1 will actually hit retail stores. Check out ComicBook.com's exclusive interview with Ortega and Mesch here.

The Other Dead #1 President Obama Cover Held In Customs