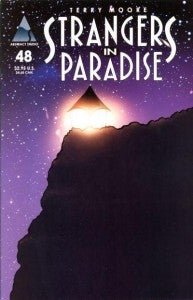 Brian Miller has been coloring comics for more than a decade and founded Hi-Fi Color in 1998. Presently he works on titles like Justice League International, O.M.A.C. and T.H.U.N.D.E.R. Agents for DC's New 52 inititive as well as  anumber of special projects for various publishers like the recently-released All-Ghoul's School and a series of Marvel Origins all-ages hardcovers being produced for the bookstore market. In this week's episode we talk about not only the "that's a job?" element of comics coloring, but also the comics market in general and the future of digital--what it means for the direct market as well as publishers and readers.

Listen to this week's podcast!

Additionally, after the interview I take a little time to riff on a number of topics, including the Before Watchmen announcement and a certain niche--formerly filled by books like Booster Gold or Dan Slott's The Thing--that I think is missing from mainstream comics right now.

Panel Discussions is produced thanks to the kindness of our friends and sponsors at Cloud City Comics and Toys and Single Bound Studios.

You can find out more about Brian Miller and Hi-Fi Color, contact them or see examples of their work at their website, where you can also find out where to find them on various different comics sites and social networks. Here, for example, you can like them on Facebook.

Alan Moore discussed Before Watchmen among many other topics with fans via a video chat this weekend, the video of which can be found here. If you like it, consider a donation to HPekar@aol.com, which will go toward building a statue of indie comics legend Harvey Pekar (it's that cause which led Moore to host the chat).

We're working on some very exciting guests for the next couple of episodes, so check back on Mondays. We may end up going weekly as early as next week in order to accommodate guests' schedules, although that's not planned.

Listen to the first installment of our "that's a job?" discussion with letterer Rus Wooton here.

Check out Troy Brownfield and Sarah Vaughn's Sparkshooter here, and keep your eyes on the site for a special promo for the new webcomic that will run Wednesday morning!

The opening music is a clip from Bruce Springsteen's new single, We Take Care of Our Own.