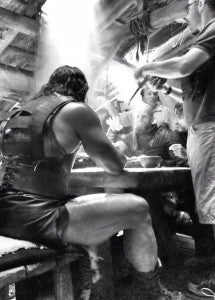 Hey, look! The Rock has hair!

Or rather, he does when hes' playing Hercules, as he's doing here for X-Men: The Last Stand director Brett Ratner's Hercules: The Thracian Wars.

So far this is the best and most revealing shot that's been tweeted out, and other than The Rock nobody yet has been releasing much of anything (Ratner isn't a huge Twitter guy, and the studio isnt releasing official stills this early in production).

Nominally, Dwayne Johnson tweeted this to acknowledge the production design of Jean-Vincent Puzos...but of course most folks are just paying attention to the first really good look yet at Hercules's duds.

The Rock is Hercules in New Set Photo