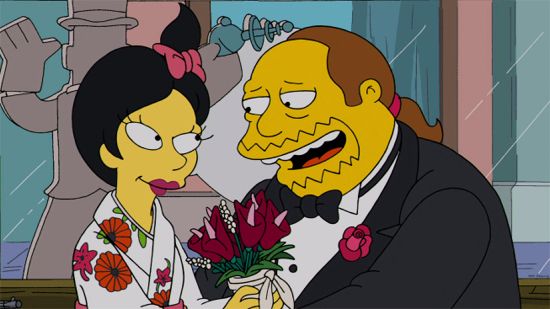 Hayao Miyazaki, the legendary creator of anime films such as My Neighbor Totoro, Kiki's Delivery Service, Howl's Moving Castle and Spirited Away, told the world that he would be retiring from filmmaking following the release of his last film, The Wind Rises. It seems the people behind The Simpsons are fans, because they dedicated an entire scene from this week's episode to paying homage to Miyazaki's work. The scene has Homer in Japan, stumbling through the streets drunk. His imagination begins to run wild and he begins to see images of creatures and characters from Miyazaki's films combined with familiar faces from Springfield. In the episode, "Married to the Blob,"  Homer stands to ruin a blossoming relationship between Comic Book Guy and an attractive young Japanese woman/manga fan named Kumiko. Stan Lee swings by Comic Book Guy's store and doles out some advice on comics, romance, and, yes, romance comics. "Married to the Blob" will air on Fox January 12, 2014. Miyazaki's last film, The Wind Rises, is a fictionalized biography of Jiro Horikoshi, designer of the aircrafts used by the Japanese Empire in World War II. The cast of the United States release includes the voices of Joseph Godon-Levitt and Emily Blunt. The Wind Rises is scheduled for release in the Untied States on November 8, 2014.