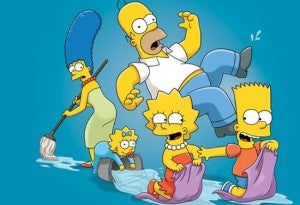 It's The Simpsons! No one is safe! With the popularity of shows like The Walking Dead and Game Of Thrones where the main characters always seem to be a risk of getting killed off, The Simpsons appears to be jumping on the death bandwagon.

During a conference call last week with reporters, executive producer Al Jean dropped some major news about the 25th season of The Simpsons, which premiered this past Sunday. Jean revealed, "We’re actually working on a script where a character will pass away. I’ll give a clue that the actor playing the character won an Emmy for playing that character, but I won’t say who it is."

The Simpsons has killed off minor characters in the past, but with the way this new death is being played up in the media, it's likely to be one of the more well-known characters. Fortunately, unlike with most shows where a character death puts an actor out of work, death is as simple for The Simpsons as to just have their artists stop drawing that character.

The Simpsons: A Major Character Will Die This Season