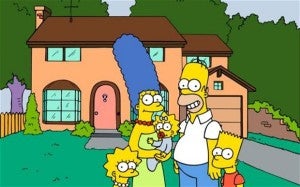 The longest-running scripted show on television will go on for at least another year, as Fox has renewed The Simpsons for a twenty-sixth season. "For more than a quarter of a century, The Simpsons has captured the hearts and minds of fans in a way that transcends ages, languages and cultures," said Reilly. "This groundbreaking series is not only the longest-running scripted show in television history, it's one of the greatest sitcoms of our time, and I'm looking forward to yet another landmark season." Last Sunday's season premiere of The Simpsons (check out our recap here) ranked as the top entertainment program of the night in the key adults 18-49 demographic and was up more than 10% from last season's average. The series has won 28 Emmy Awards, and was nominated for an Academy Award in 2012 for the theatrical short "The Longest Daycare." It has been the subject of a  feature film, a virtual coaster ride at Universal Studios, received a star on The Hollywood Walk of Fame and has been honored with five U.S. postal stamps personally designed by creator Matt Groening.

The Simpsons Renewed For Season 26