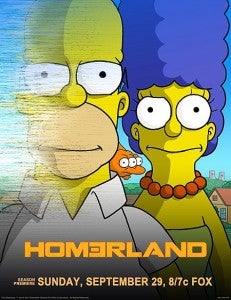 We know you've been waiting to hear about the television event of the night: The season premiere of Fox's The Simpsons! Titled "Homerland," the episode lightly spoofs the Showtime drama series Homeland--which also debuted its third season tonight. There was something else going on over at AMC, as well, but there was almost no promotion for it so we're not sure what. 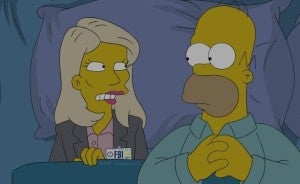 This is a season that's expected to be full of crazy events--it's set to cross over with Futurama and Family Guy at different points, to guest-star Stan Lee (again) and Harlan Ellison in an episode that sees Comic Book Guy get married, and to reportedly kill off a major character. And that's besides the work that Guillermo del Toro, the director of Hellboy and Pacific Rim, is putting in on this year's Treehouse of Horror special. So how did it all kick off? Well, the chalkboard gag of "25 years and they still can't find a new punishment" was a nice wink-and-a-nod to the landmark season--something I'm sure we'll get plenty of throughout the year. The couch gag played with it as well, but wasn't quite as funny. 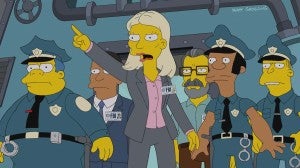 The show opened with a surreal, Homeland-style montage, followed by a healthy breakfast and then Homer heading off to "Atomic-Con," a convention for nuclear plant employees, with Carl and Lenny. There, the trio load up on swag while ignoring the safety training exercises, and then getting drunk with friends. Cut to three days later, and Lenny and Carl see the Simpsons at the airport, hinting that Homer had vanished and they weren't really thinking whether he was still alive or not. Marge's sisters and Chief Wiggum come over, but before they can start investigating anything, Homer comes home, seeming all brainwash-y. At dinner, things get weirder when Homer first doesn't strangle Bart and then turns down pork chops. Later, at Moe's, he won't drink, either, and he's suddenly good in bed. This makes Marge so enthusiastic that only Lisa cares what's really going on. At the Qwik-E-Mart, Wiggum is checking out a terrorist threat to Springfield by hassling Apu. He tells Lisa and Apu that someone in town has been "turned" and is working for terrorists. Back at home, Lisa sees Homer kneeling on a prayer rug and then looking at nuclear plant blueprints. She tries to tell Marge about it, but Marge is blinded by Homer's recent good behavior. So that night, Lisa calls the FBI (with an agent resembling Claire Danes's character from Homeland, voiced by guest star Kristen Wiig and suffering from visual hallucinations brought on by antidepressants. The Agent sneaks into bed with Homer, and does a poor job of getting any information out of him. The next morning, Homer brings a cart into the power plant carrying a large item under a tarp; he goes through all the security checkpoints and leaves what looks like an explosive unit on teh floor in front of the air conditioner unit. Lisa meets him there, attempting to stop him - and Homer finally explains wht happened in Boise at the convention. He was picked up by hippies, taught about animal rights and then forcibly detoxed from alcohol. The "prayer rug" is in fact an "afffirmation rug" that helps him meditate on keeping himself clean and positive. Having been shocked to find out that the power plant is bad for the environment (one of the million things Lisa has told him a thousand times), Homer's plot is to release spoiled food into the air conditioning vents, rendering the plant too smelly to use without casualties--but the FBI and the Springfield Police jump him. Lisa successfully turns on the machine to stink up the plant, a plan that would have worked if not for the fact that, according to Mr. Burns, the plant has never had a functioning air conditioner. That's enough to get him in trouble with the FBI, ironically, even though it saved the plant a moment ago. The plant is closed for maintenance and Mr. Burns is taken into custody. When, after having accomplished his mission in a roundabout way, Homer is told he doesn't have to return to his normal life now, the wisdom of that is immediately thwarted when a beer seemingly falls from the sky (it was deployed by Moe, and the apparatus will pay for itself after one night of Homer binging). Agent Annie walks alone into the sunset at the end of the episode, hallucinating a beautiful world and punching Ralph for no reason along the way. The end result of all of this is new, improved security measures at the plant. And a return to the couch gag in the closing credits--a 25th anniversary celebration that lets everyone behind the red velvet rope--EVERYONE, including the cast of Family Guy, Bob's Burgers, American Dad and The Cleveland Show--except for Homer.