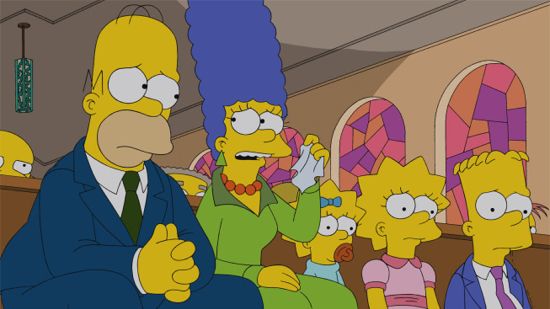 Fox is airing two back-to-back encore episodes of The Simposons tonight. In the “YOLO” episode, Marge encourages Homer to embrace his “You-Only-Live-Once” spirit by inviting an old pen pal to stay with him and cross items off of his “to-do” list from when he was a 10-year old. Meanwhile, Lisa institutes a new honor code at Springfield Elementary

In the “Four Regrettings and a Funeral” episode, tour Springfielders are prompted to try to right past regrets following the funeral of a beloved neighbor. Homer regrets selling his Apple stock to buy a bowling ball, Marge worries she caused Bart’s rebellious streak, Mr. Burns reminisces about a romance he gave up with a beautiful Parisian woman and Kent Brockman admits he was too afraid to leave local news and follow his former partner Rachel Maddow (guest appearing as herself) to cable news

The Simpsons: YOLO & Four Regrettings And A Funeral