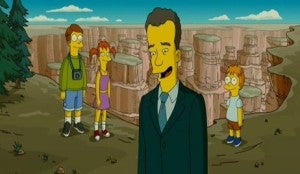 Earlier today, National Entertainment Collectibles Association (NECA) announced an exclusive global merchandise program around the groundbreaking animated series, The Simpsons. The limited-edition boutique collection, announced today at Licensing Expo 2013, will feature twenty-five of the greatest guest stars who have appeared as themselves on The Simpsons.  The first five guest stars to be featured will include James Brown, Tom Hanks, Kid Rock, Yao Ming and Hugh Hefner. Available to consumers in early 2014, the collection will feature a number of different products, highlighting the guest stars's animated likenesses as depicted on The Simpsons.  New products will be introduced every two to three months, containing different groupings of guest stars, with limited quantities available at select pop-up shops and retailers worldwide. "We are honored to celebrate a show that continues to entertain generations of fans," said Joel Weinshanker, president and COO at NECA. "When you look at the guest stars over the years, they read like a who's who of music, movies and television. I, for one, have made room on my shelf for all the amazing action figures that will be part of this program." "This unique partnership with NECA brings to life one of the many distinctive attributes of The Simpsons:  its unmatched guest star roster," said Roz Nowicki, executive vice president of global sales and retail at Fox Consumer Products, who said the line was "developed with The Simpsons fan in mind."

The Simpsons's Greatest Guest Stars to Be Featured on NECA Merchandise