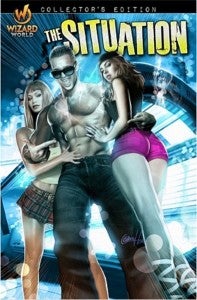 Mike “The Situation” Sorrentino will be appearing at the Wizard World Austin Comic Con on October 27, 2012. The well-known reality TV star I launching his own comic book series. The Situation recently signed a publishing and development deal with Wizard World to create a comic book superhero based on him and his family.

At the Wizard World Austin Comic Con on Saturday, October 27, “The Sitch” will meet fans, pose for photo ops, sign autographs, and sign copies of his Collector’s Edition #1 comic book. The Situation comic series is written by Paul Jenkins and drawn by Talent Caldwell with a cover by Greg Horn.

“We are thrilled to welcome our partners Mike ‘The Situation’ Sorrentino and his family to their first Wizard World show,” said John Macaluso, who is CEO of Wizard World. “Austin is a large-scale event, which is perfect for someone like Mike, who knows a thing or two about big crowds and enthusiastic fans.”

“I am looking forward to being a part of the Wizard World experience,” said Sorrentino, who grew up as a comic book fan. “It’s exciting to think about how many fans of comics, TV and pop culture will be there, and I’m honored to be included with stars like Patrick Stewart and Eliza Dushku.”