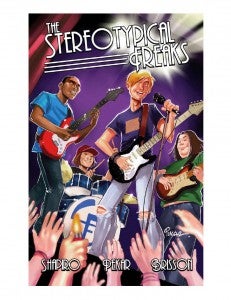 This week, children's book writer Howard Shapiro will bow The Stereotypical Freaks, a graphic novel he began work on about five years ago and which he worked with for the better part of that time, along with artist Joe Pekar. The story revolves around four characters who take their act to a high-stakes Battle of the Bands, which consumes them even as it seems that one of them has far bigger concerns. A teen drama that deals with a lot of issues and offers a good deal of comic relief as well as ruminations on the power of music, The Stereotypical Freaks is definitely worth a read. Shapiro joined ComicBook.com to discuss the book, which is in stores Wednesday. So, give us the five-cent pitch for the book. I had actually wanted to do something different because I had done kids' books--three picture books and then a middle-grade novel. So I wanted to stretch out a bit. I was a huge fan of graphic novels and so this idea just came to me. There was a kid named John Challis, just outside of Pittsburgh here who in 2008 or 2009, who had late-stage cancer. He played in his last high school game and he got a hit. So it was a local story and then a national story as sports teams got involved, including the Pirates and the Steelers. He met with A-Rod in New York, Joe Madden from the Tampa Bay Devil Rays. So he got some publicity but the thing that was interesting is that he was seventeen when he passed away but he was wise beyond his years. Being a dad myself, it's kind of heartbreaking to watch and read stories, so I wanted to kind of base a character on him with that kind of courage and that kind of knowledge and wisdom. The two books I had done previously were about hockey, so I wanted to steer away from sports a little bit but I did want to do something that I was still interested in and so I decided to do music, and rock 'n' roll specifically. I kind of merged the two ideas where I wanted to have a kid who was like John, but also work in a rock 'n' roll kind of story. So the battle of the bands came up and I just kind of used John's overall story for one of the characters and worked in some life and high school stories. I like high school stories, and I hadn't done one yet, so I wanted to get that in there as well. I wrote it in about 2008 or 2009, and it took me about two years, almost three years, to illustrate it. It was a fun project, but it took a very long time to do. 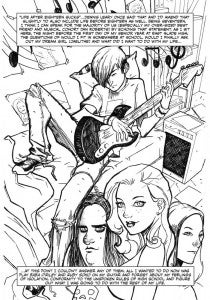 So why this one that you wanted to take in this direction instead of Hockey Player For Life or any of your other projects? What happened was that when I did Hockey Player For Life, I did a couple of elementary school visits and I was talking to the librarian. He told me that kids love graphic novels. He said that kids love them, even the boys--that they can't get boys to read, but he can put anything out there, it can be history or whatever it is, and if it has a graphic novel type of theme or it's in that genre, he just couldn't keep them on the shelf. So I went through that section at the main library here in Pittsburgh and I took five or six out, and I really just fell in love with them and that's what gave me the idea. Being that bands are kind of a visual thing, and it works better if you could really pull it off. So we studied a lot--I sent the artist clips of like when The Clash come out of the tunnel playing "Should I Stay or Should I Go?," which I think is one of the great music videos. And so we really focused on that visual aspect of the music, and the artist I worked with is really great with facial expressions and so I thought it was going to work much better as a graphic novel. It all just kind of came together; it wasn't planned out that I was going to do a graphic novel, but it was a lot of fun to do and it worked out really well. Have you done any digging in terms of finding other rock 'n' roll comics? You have some overlap in things like Daniel Clowes and Terry Moore and Mike Dawson. Two that really stuck out to me that were huge influences. The very first one I read was called The Big Con by Daniel Clyde. The other one was called Garage Band, and it had that theme of these kids who were in a band and they stole a guy's amp--it was that kind of story....But yeah, I did want to stay away from those that were a huge theme of rock. I'm familiar with those guys, but I kind of made a conscious decision to stay away from them because I didn't want to kind of copy or have any type of overlap between them. I always thought the MacGuffin was the Battle of the Bands but the story's really about these four friends and how they get along and how they're different. 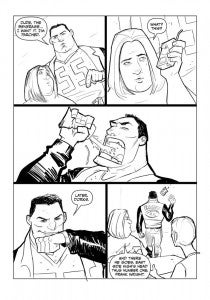 Is one of the things that you want to do to try and get these into school libraries? I think we're still kind of working our way through. There's a group called Little Kids Rock that Steven Van Zandt is a part of, and I tried to get in touch with those folks--some music stores as well, but it would be great to get into the schools. it's kind of one of those things where I try and do a couple every year, but it would definitely be something I'd like to pursue. One of the things I'd like to do is show the power of rock. For guys 35, 40 years old, that was such a huge thing whereas with my kids they don't have a connection to a band, it's just whoever's popular at the time. You can't preach and things like that--you always want to entertain, but I wanted to get the message that John Chaliss had about life across. And if it's not entertaining, that won't work because nobody's going to read it. Do you think there's an inherent value in doing that through entertainment? I had a lot of people in my ear over politics and morality and the like when I was a kid, but most of my political and moral education came from Bob Dylan and Bruce Springsteen. Not to be trite, but "I learned more from a three-minute record, than I ever learned in school." I think you hit it on the head. The key is being accessible. One of the first books that I did was a book about Chanukah, and it was the same thing--there are so many books about religion but there's very few kind of mainstream, it's just a fun story. The bowling book I did, same thing, it's just a story for kids to get into. But you're exactly right--Dylan and Springsteen both, in this book and all the books I write, I always put their names in the acknowledgments because they had such a huge influence on my writing. They're definitely songs I listen to while I'm writing which help me tremendously. They helped to show that if you can educate in an entertaining way, then it will resonate as opposed to just trying to beat it over the head. The way to do that, I think, is by making it fun. This is a pretty dark story in terms of some of the subject matter, but there's still hope and it's something that hopefully everybody can relate to..