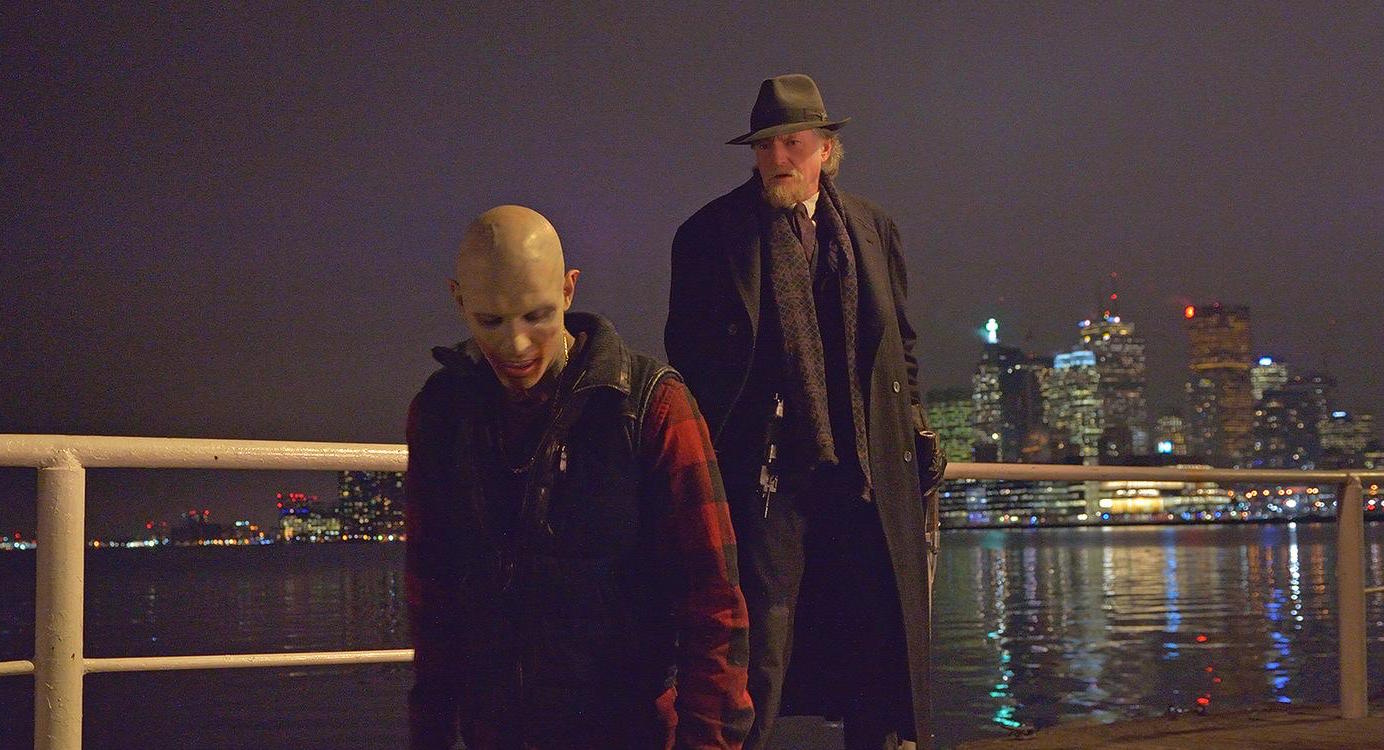 “Fort Defiance” of The Strain’s second season opens with Bolivar (Jack Kesy) dragging some sort of luggage through a Manhattan alleyway. He’s stop by two members of the NYPD – who open his bag to reveal what Bolivar calls “the Master’s resting ground.” Bolivar then sends out a summoning shriek to other nearby vampires, who attack the police officers allowing Bolivar to escape.

In Brooklyn, Ephraim (Corey Stoll) and Nora (Mía Maestro) are somewhat pleased but much more disappointed that their current efforts work to kill the vampire strain but also kill the host body, very quickly. Later, Zach (Max Charles) attempts to leave town on a bus to find his mother, but Eph, Fet, (Kevin Durand) and Dutch (Ruta Gedmintas) find him just in time. Dutch notices a “missing girl” flyer for the not-just-a-friend she lost at the convenience store last season, Nikki.

All the while, Abraham (David Bradley) is experimenting with some vampire goo and a worm – that he bottled after taking out a random vampire in town – ultimately making some sort of liquid that he drops into his own eye with a small eyedropper. He is later found unconscious on the floor by Nora, who resuscitates him. Abraham won’t admit to putting anything in his eye or experimenting at all.

In Manhattan at the Ancients’ headquarters, Vaun is instructing Gus (Miguel Gomez) in the art of hand-to-hand combat with vampires, which involves grabbing their tongue/tentacle thing and pulling it out entirely, killing the vampire. Vaun explains that the training is necessary for an upcoming important mission: to kidnap Eldritch Palmer.

Next, Reggie Fitzwilliam (Roger R. Cross) – former employee of Eldritch Palmer – is shown entering Staten Island on the nearly empty Staten Island Ferry. The entire island is on an extreme lockdown, making it difficult for him to visit his brother who lives there, though he eventually makes it.

The major of New York City, George Lyle (Rob Canada), holds an announcement nearby on Staten Island, introducing Councilwoman Justine Feraldo (Samantha Mathis). She declares that Staten Island is official “plague-free,” and drops the tarp on a disturbing display: multiple, beheaded vampires, tied up to a chain-link fence, declaring “This is who we are. This is Staten Island.” Feraldo and Lyle make plans to repeat their process city-wide. 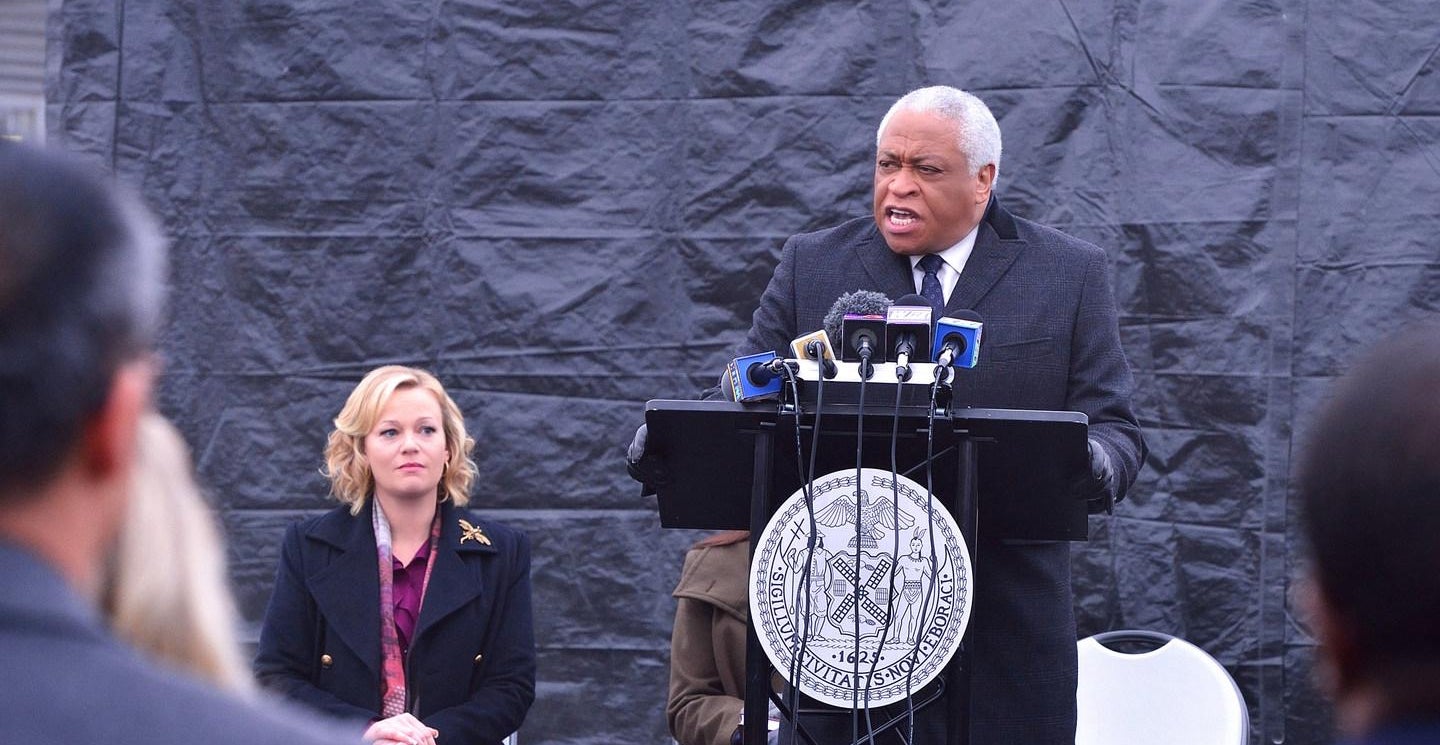 Then, Eichorst (Richard Sammel) and Bolivar arrive at the Stoneheart Group in Manhattan. The Master is displeased about how close Abraham was able to get to Eldritch, and now he has commanded Bolivar to keep watch over Eldritch’s office. Coco Marchand (Lizzie Brocheré) confides in Eldritch (Jonathan Hyde) that she doesn’t think they are “good men,” but he tells her to stay out of it for her own safety.

The next day, Nora begs Abraham to tell her what’s wrong with him. He confides in her that he is actually 94 years old and that he consumes the worms to prolong his life. They cannot be directly ingested, but you can absorb them through your eyes. Abraham refuses to die from normal causes and will only concede to death via the Master.

Fet and Dutch meanwhile visit Nikki’s mother in Brooklyn Heights. She has no updates on Nikki but certainly isn’t happy to see Dutch – the woman she believes corrupted her daughter and eventually caused her death. Dutch returns to the truck, furiously upset, believing the mother to be mostly correct. She warns Fet that Nikki’s mother is right about her.

Back at the lab in Brooklyn, Eph begins to “talk” to the Master through their remaining vampire subject, since the Master can see through them. “You took my wife, my son’s mother, “ he says, adding “I’m gonna take hundreds, thousands of yours, I’m gonna work my way all the way to the top – to you.” Lastly, Eph says he will kill both his son and himself if it will prevent either from getting turned.

Gus enters Eldritch’s building near the end of the episode under, claiming to be an elevator inspector, distracting the guard, and allowing Vaun and some other vampires to follow him inside. While Gus and the security guard ride the elevator up, the vampires grab onto the bottom and zoom upwards too. More security workers notice this through cameras, forcing Eldritch and Coco to move into a super secure, secret room.

From that room – Eldritch inputs a code that creates UV lights from the ceiling of his office. The lights shine down on the vampires, burning them. They try to get a way, but the floor drops into a put, where they all lie, bursting into flame under the lights. Vaun tells Gus to escape, which he manages to do.

The episode ends with Abraham in a fantastic mode, having gotten “his second wind.” Additionally, Eph and Nora think they have perfected their plague. All that’s left to do is release their vampire subject, to see if it worked.

73rd Emmy Awards To Air On CBS In September

Will Smith Hints At Possible Future In Politics

Xbox Game Pass Adds One of 2020's Most Popular Games