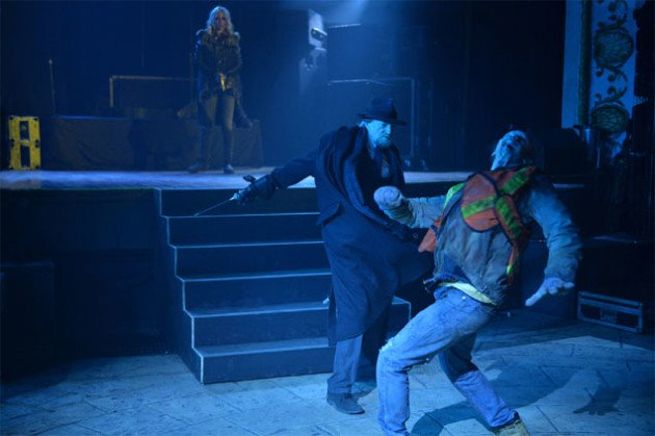 The season finale of The Strain, entitled “The Master,” opens as Eldritch (Jonathan Hyde) confidently strolls into the pawnshop, requesting that everything in the basement be brought back to his office, including the vampire heart. Thomas (Richard Sammel) appears from the shadows in the basement to tell Eldritch that he hasn’t been turned; the Master has merely granted him health, not immortality. When Eldritch angrily asks when it will finally happen, Thomas reminds him that his conversion is special. The Master wants Eldritch to be his right-hand man for eternity.

Back at his office, Eldritch admires the vampire heart on his wall of failed organs when he angrily asks his loyal assistant, Mr. Fitzwilliam (Roger R. Cross), why he wasn’t told about Eph’s emergency broadcast. Mr. Fitzwilliam turns on Eldritch, saying that he never wanted to be part of a devil’s bargain and that the apparent resurrection is an affront to God. He leaves and demands that Eldritch never follow.

In a dream at the hideout, Zach (Ben Hyland) remembers the first time he rode his new bike, while Eph (Corey Stoll), Abe (David Bradley), and Fet (Kevin Durand) discuss upcoming plans in the living room. Eph believes that something very important to the Master must be above ground, directly above the spot where they ran into him below ground. Abe and Eph have a brief argument when Abe tells Zach that they are going after the Master again.

Eph and Fet search for the spot they discussed with Abe and find a theater, Bolivar’s. Luckily – it used to be a speakeasy, and Fet knows all about it, including how to break in and how to access its secret tunnel. They use the passageway to get to the theater, where they find the Master’s broken coffin, which is being re-assembled. When Eph and Fet find resting vampires all around, they turn back. Fet moves a nearby manhole cover outside, hoping that the sunlight will prevent extra vampires from joining.

On the roof of their hideout, Nora (Mía Maestro) looks out and sings, smoking a cigarette. Eph tells Nora that he cannot go after the Master because he has to stay with Zach, but Nora angrily says that he doesn’t get that luxury. Zach has to come with them. Next, Eph and Abe sit down with Zach, explaining that he’s going to join them. Abe gives Zach a silver sword, and a teary-eyed Eph shows him how to hold it, how to scare vampires with it, and where to strike the vampires if possible.

At the entrance to Bolivar’s, Abe gives them a pep talk before they go, instructing them never to stop until the Master is defeated, no matter what they see or hear, and the group moves forward. Luckily, the light from the manhole is holding a mass of vampires back from the opening, and Fet blows them up with dynamite. Abe begins to hear the Master’s voice almost as soon as they enter the Bolivar’s main stage.

They spread out and attack, and it doesn’t take long for them to see the turned version of someone they’re familiar with. Dutch slashes through an older woman she used to know, setting the scene for an emotional, grisly battle. Thomas joins the fight before long, leading the pack.

Abe goes off separately to look for the Master, all the while hearing the voice of his wife in his head, pleading for him to help her. The Master finally chooses to reveal himself to Abe, Eph and Zach. They begin to break the windows, letting the light weaken him. As he loses strength, the vampires fighting the rest of the group begin to draw back.

Eph and Abe eventually force the Master out of the window, on to the street, and into the light. At this point, the other vampires literally begin walking backwards, hearing the Master say “come to me.” The Master runs down the side of the building and escapes, seemingly unharmed. When Nora, Fet, and Dutch meet with Eph, Abe, and Zach, they are horrified to learn that sunlight did not stop the Master.

They go back to Eph’s home to pick up one of Zach’s extra inhalers, but once they get inside, Eph realizes his son has played him. Zach faked his heavy breathing to have an excuse to pick up a family photo album. Soon, they see a silhouette outside and find vampire Kelly in the window. She calls out to Zach before Eph shoots at her and she leaves. Abe explains that the Master will continue to use Kelly to manipulate Eph and Zach. Eph takes a drink for the first time in years.

Meanwhile, all the while somewhere deep underground, Gus (Miguel Gómez) is being held hostage by the super-developed vampires. He tries to escape more than once only to be immediately overpowered. The vampire guard explains that they have kidnapped him because he works for Thomas, but Gus makes it clear that Thomas is at the top of his hit list, before attempting to sneakily run away again.

Gus finds himself in a dark room, where “the Ancients,” four super-developed vampires are sleeping. The guard explains that an ancient truce has been broken, assumedly between the Ancients and the Master. They need a human being to be their warrior of the day, offering Gus serious pay to be their man.

The episode ends with a monologue from Abe. The world is not the same today as it was a week ago. What will it be like a month from now?

The Strain Season Finale Recap With Spoilers: The Master