Well, the big day has come and gone. The first issue of Justice League #1 has hit and flown off comic book shelves everywhere. Nick Winstead reviewed Justice League #1 for Comicbook.com, and he called it "a thrilling ride indeed." After the great story, there was also a rather interesting sketchbook in Justice League #1, which showed some different costume looks that had been under consideration for the world's greatest heroes. Of course, one of the biggest topics of conversation about the new DC Universe has been Superman's new costume. Fans have heatedly debated the pros and cons of the missing red trucks and the armor look. Well, now thanks to the Justice League sketchbook, we know that there were actually some other major costume changes under consideration for the Man of Steel. Here's a look at the Superman costume that almost was. 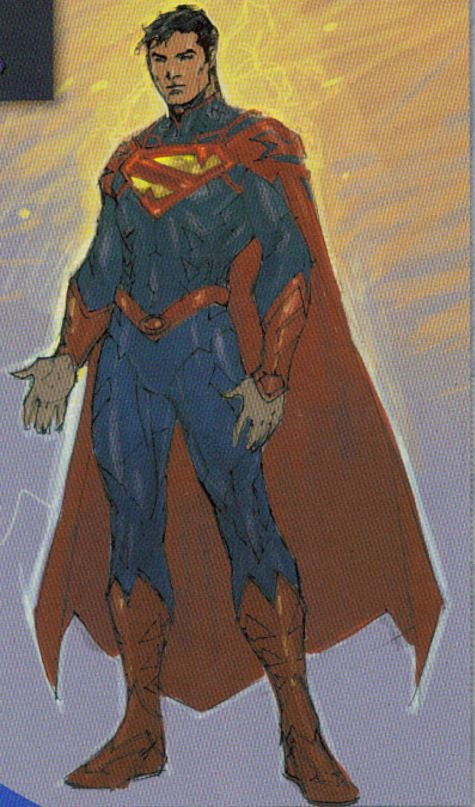 In this version, the red underwear is still nowhere to be seen, but Superman has added some red arm guards to take their place. Another major change is that the familiar red cape is attached directly to the armor itself. There are also interesting red shoulder pads with arrow shaped patterns, where the cape connects to the armor. The big red "S" on Superman's chest is different with more pointed ends on the "S". Even though this costume didn't make the final cut, there does seem to be an indication that we might be seeing it in the future. According to a note in the Justice League sketchbook, the full story of this costume will be played out in Action Comics. What are your thoughts on the Superman costume that almost was? Do you like it better or worse than the actual new look for Superman?

The Superman Costume That Almost Was

Star Wars: Taika Waititi Is "Throwing Everything at the Wall" for His New Film

Jason Schwartzman Cast in The Hunger Games: The Ballad of Songbirds and Snakes

New The Lord of the Rings: The Rings of Power TV Spot Debuts