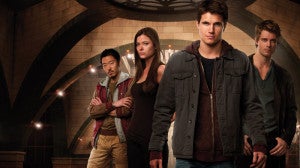 The CW Network have provided ComicBook.com with a look at the New York Comic Con highlight reel, giving the best and most action-packed moments of the first eight episodes of their new series The Tomorrow People.

The series took New York Comic Con by storm today with an encore screening of the series premiere episode on the big screen. The screening was followed by a first-look at an exclusive, action-packed highlight reel created specifically for NYCC, featuring a sneak peek at footage from the show’s first eight episodes.

Highlights include Stephen Jameson’s (Robbie Amell) decision to become a double agent for The Tomorrow People; his best friend, Astrid (Madeleine Mantock), first witnessing his powers; Stephen sharing a kiss with fellow empath Cara (Peyton List); Tomorrow People leader John’s (Luke Mitchell) mission to find the traitor in their midst; and the mind-bending blend of action and effects that are already a hallmark of the series.

The film is a remake of a 1970s BBC series, which ran for six years.