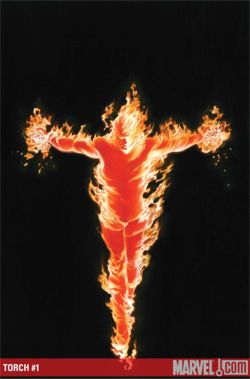 As a fan of Marvel's early superheroes, I had been waiting for The Torch #1, and it did not disappoint. The first issue actually focuses on the Human Torch's former sidekick Toro, who is also known as Tom Raymond. If you haven't read the first issue yet, then be warned that there are spoilers ahead. It only takes one page for The Torch #1 to establish itself as a good comic book. Things kick off with Tom Raymond remembering some of the most famous and most tragic fires in history. Like many formerly dead superheroes, Tom Raymond has been brought back to life. The cool thing about The Torch #1 is that Alex Ross and Mike Carey detail some of the difficulties related to coming back from the dead. Tom finds that his wife has re-married and that he can't get a job because he has no paperwork proving who he is. As Tom tries to drown his woes in whiskey, the Vision keeps appearing to offer guidance. Finally, Tom asks the Vision to take him to the Thinker, the man who killed him. A.I.M. has hired the Thinker to build them an incredible destructive weapon. Ross and Carey are spot on in their characterization of the Thinker as a serious, intelligent man, who is easily annoyed and has little patience. The battle between Toro and the Thinker is over before it starts. After doing some lab work on Toro, the Thinker develops a theory that leads him to send a team to exhume the corpse of The Human Torch. The Torch #1 offers plenty of twists and turns that have me eagerly awaiting the next seven issues of the limited series.