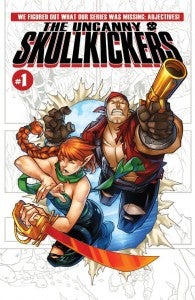 Do you think that Image Comics might be poking just a little bit of fun at Marvel Comics with their latest announcement? According to Image Comics, they will be re-booting the Skullkickers in Uncanny Skullkickers #1 this February. "After almost twenty issues of critically-acclaimed cranium-smashing adventure, we felt it was important to remind retailers and readers that Skullkickers is the most enjoyable adventure series in the entire comic industry," said Image PR and Marketing Director Jennifer de Guzman. "What better way to do that than to add a spiffy new adjective to it! That's what people do, right?" Uncanny Skullkickers is written by Jim Zub with art by Edwin Huang. According to Image Comics, the re-booted series will begin the second half of the epic six-arc Skullkickers storyline and is a perfect jumping-on point for new readers of the action-comedy fantasy series. It's new. It's classic. It's a modern reinterpretation that gets back to the roots of these timeless characters. "We pride ourselves on making each and every issue of Skullkickers accessible, but this spiffy #1 is that times ten," said creator Zub. "We quickly recap the story that's come before and then push forward into new action-packed territory: a deadly island of mystery, swashbuckling adventure, ferocious man-eating turtles, pissed-off apes...  it's a cornucopia of entertainment." But what does this mean for all the current collectors that were looking forward to Skullkickers #19? Well, fortunately, Image Comics is talking care of those collectors as well with a special "issue #19 variant" B cover. Uncanny Skullkickers #1 will be released in comic book stores on February 27, 2013.