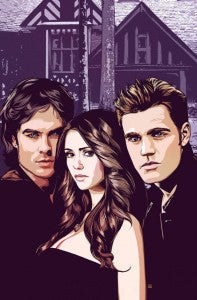 The anthology series will feature stories by B. Clay Moore, Colleen Doran, Leah Moore and John Reppion, Tony Shasteen and Cat Staggs, among others. Some of Shasteen’s character sketches can be seen at the official Vampire Diaries Facebook page.

After an incredible start to the new season of  THE VAMPIRE DIARIES on The CW fans have even more to be excited about – the digital comic based on the show announced at San Diego Comic-Con will launch on Thursday, October 31.  Elena, Stefan and Damon will make their comic debut in a new Digital First anthology series that brings many of comics’ greatest talents to Mystic Falls, and sets them loose to bring the characters to life in an entirely new way. Creators working on the project include writers B. Clay Moore, Colleen Doran and the team of Leah Moore and John Reppion, while artists include Tony Shasteen and Cat Staggs. Make sure to “like” the show’s official Facebook page for an exclusive look at early character sketches from the new comic.

Tune in each Thursday at 8/7c on The CW for THE VAMPIRE DIARIES and mark your calendars for the launch of the new digital comic series on October 31.