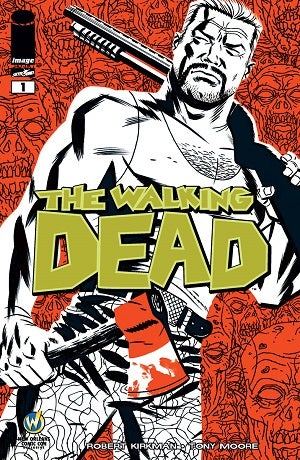 Abraham is featured in another new, convention-exclusive cover for Skybound's The Walking Dead #1, set to be distributed at Wizard World New Orleans.

Full-price ticketholders will get a copy of the comic upon entry, and VIP attendees will receive an additional black & white sketch version of the comic. It's the first in a series of sketches for 2015 featuring different artists doing The Walking Dead #1 variants. Wizard had a similar line of variants that proved popular in 2013.

The first artist is Michael Cho, who has drawn a cover featuring Abraham (who first appeared in The Walking Dead #53). Future artists haven't yet been selected and will be announced as they are.

“Michael Cho is an excellent choice to debut the 2015 The Walking Dead #1 exclusive variant cover series with Wizard World,” said Kirkman. “His interpretation sets a strong example for the quality fans can expect throughout 2015.”

“Wizard World is proud to be working with an artist as accomplished as Michael Cho on the first book in the series,” said John Macaluso, Wizard World CEO and President. “With Season 5 of The Walking Dead in full swing, the franchise is more popular than ever at Wizard World shows, and Michael's work is a great start to the highly collectible series.”