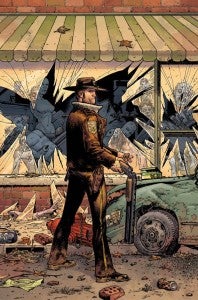 With superheroes the by far dominant subject matter of most modern day comic books, it might come as a little bit of a shock that the best selling comic book of the year so far has nothing to do with superheroes. Of course, it probably won't be surprising to learn that the best selling comic book is an issue of The Walking Dead, which is the basis for a very successful TV show on AMC. The Walking Dead is a testament to the fact that the opportunity of the comic book medium stretches far beyond just superheroes. Perhaps, the series will help dispel the notion that only superhero titles sell and convince publishers to take more chances on comic books revolving around non-superhero subject matters.

According to USA Today, The Walking Dead #115 has sold more than 350,000 copies through retail orders, which by far makes the issue the best-selling comic so far in 2013. The Walking Dead #115 kicks off a twelve issue story arc called "All Out War." It's also being recognized as the 10th anniversary edition of the series. The issue was published with 10 variant covers, which helped to boost sales as some collectors like to collect every variation of their favorite titles.