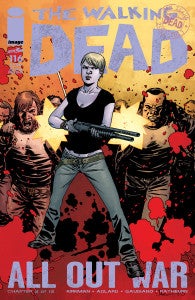 #116, part two of the six-part, biweekly "All-Out War" event from Robert Kirkman and Charlie Adlard, has sold out through Diamond Comics Distributors and will head back for a second print, Image Comics announced today.

For the first time since the issue aped in the recent TV midseason finale, Rick Grimes and his group of survivors find themselves in the midst of a multi-part, pitched battle with another group of survivors--this time with a number of other camps drawing up battle lines and picking sides as well.

You can see the official statement from the publisher below.

The long-running, critically-acclaimed series that inspired the hit TV show just keeps drawing in readers with every new story arc. ALL OUT WAR explodes in THE WALKING DEAD #116, by creator Robert Kirkman and artist Charlie Adlard, when the first shots are fired between Rick's army and Negan's Saviors. Fans of the TV show who were left hanging on the mid-season finale can jump into the comic series' action as it picks up momentum.

Image Comics is committed to keeping all issues of THE WALKING DEAD: ALL OUT WAR available, and is pleased to announce that THE WALKING DEAD #116 will be going back to print to meet customer demand. The second printing will release on 1/8/14 and will be available for order with Diamond Code OCT138242.

THE WALKING DEAD #115 2nd printing, featuring a stunning gatefold cover, is still available in stores and can be ordered with Diamond Code AUG138407.

The Walking Dead #116 Sells Out, Goes Back to Press