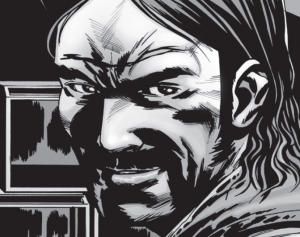 At the end of "Walk With Me," the season's third episode of The Walking Dead, viewers got a look at one of the most enduring images of Robert Kirkman's Image/Skybound series The Walking Dead on the small screen, with the reveal that Woodbury's Governor spends his downtime gazing at a wall of aquariums, filled with the disembodied heads of the undead.

Most notable, though, is the fact that the head of Lieutenant Wells, the man who flew the helicopter which crashed outside of Woodbury, was also in an aquarium.

While walkers are one thing--they can be seen as hunting trophies, and while it still indicates a seriously damaged person, they also presented a grave danger to the person who killed them--but showing that the character isn't above killing and mounting a person who posed no threat to him is something else entirely.

And then, this week's story, set in the past and exploring some of what made the Governor tick, we learn something interesting: in the comics, the very first head to go into the aquariums...was not a zombie.

More than that would spoil the fun. Check out the Liberty Annual, on sale today. Rumor has it that the Walking Dead story is jacking up demand, so if you can't find it at your local store, remember that you can still get it at ComiXology.

The Walking Dead: A Creepy Similarity Between Today's Story and the TV Show