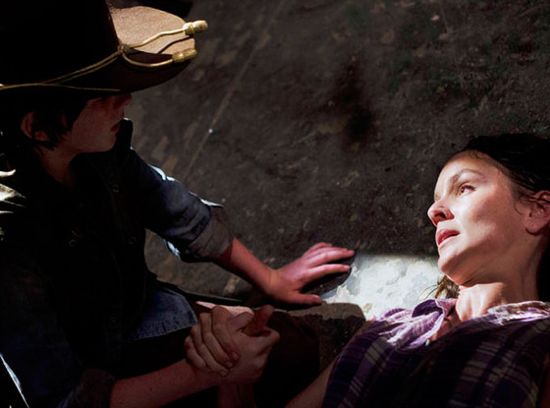 With The Walking Dead on its mid-season break, we decided to take a look back at some of the most shocking moments from season 3 so far. To say the least, The Walking Dead season 3 has really picked up the pace, and it looks to be shaping up as the best season so far. Pretty much every single episode of season 3 has been packed with more twists and turns than all of season 2. Here are our top five shockers so far for season 3.

5. T-Dog’s Death – While we can’t say that T-Dog wasn’t an odds on favorite to meet his demise this season, he had been a cast member since the first season. After being bitten by a zombie, T-Dog died an honorable death. He proved to be a true hero, sacrificing his body as zombie lunch to allow Carol to escape.

4. Michonne Killing The Governor’s Daughter – While fans of The Walking Dead comic books knew this was a possibility, no one knew if the TV show would go there. Seeing The Governor gently combing a little girl’s hair, only to have her turn around and be a zombie was a chilling moment. However, it was nothing compared to when Michonne stabbed her katana straight through Penny's head, right in front of The Governor. It almost made us feel sorry for The Governor.

3. Merle’s Return – How's about a big hug for your old pal Merle? And with that line, Merle rejoined the world of The Walking Dead. While Merle is a reprehensible character, Michael Rooker so expertly plays him that he’s become a fan favorite. Merle’s return has lived up to the hype, as he has delivered some of the most terrible and sometimes hilarious lines of the season.

2. Maggie’s Undressing – Merle brutally beats Glenn to try to get him to reveal the location of his brother, but it’s nothing compared to what The Governor does to poor Maggie. After threatening to do harm to Glenn if Maggie doesn’t remove her shirt, The Governor walks over and forces Maggie down on the table. Even though The Governor appears to have not followed through on his veiled threat, the implication was still there, and it was one of the most cringe-inducing moments ever on The Walking Dead.

1. Lori’s Death – After T-Dog got eaten by zombies, most viewers thought they had seen their shocking death for the episode. However, Lori Grimes wound up meeting her end in the very same episode. In what had to be one of the most gruesome scenes ever on The Walking Dead, Maggie had to cut the baby out of Lori. And if Lori’s death wasn’t shocking enough, Carl then had to put a bullet in his own mother’s head to keep her from coming back as a zombie.

The Walking Dead: Five Biggest Shockers Of Season 3 So Far