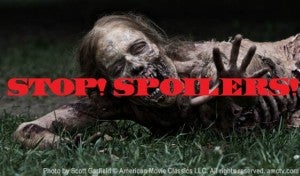 The story below contains spoilers for The Walking Dead comics by Image/Skybound, and potential spoilers for the television series based on it. Because the conversation below features substantial spoilers for the comic, we want to give plenty of room for spoilers, so that even the character's name does not appear on the front page preview for this story, or on social media.If you don't want to be spoiled, turn back now.

Sarah Wayne Callies, the actress who plays Lori Grimes on AMC's hit zombie drama The Walking Dead, says that ever since she took the role, one thing has been clear in her mind: eventually, Lori has to go. She's passionate about this, and other things, in a new interview with The Hollywood Reporter:

"[Former Walking Dead showrunner] Frank Darabont and I actually -- before he was tragically and unfairly removed from the show -- we used to argue about it. I argued that it was necessary to kill Lori and I feel very strongly that for all of the other deviations we may have from the comic book, killing Lori does something to Rick that is vital for the story and can't be done any other way.

"I've said from the beginning, not only am I okay with Lori dying, but I think she has to. I've played this character with an eye toward an end."

The relationship between Rick and Lori has been the subject of substantial speculation this season, following the obvious tension between the pair in the spring's season finale. In the comics, that dynamic never really got a good foothold, but you know what did happen? Lori was killed during the final, massive battle between Rick's band of survivors and The Governor's Woodbury Army. It's the death of Lori (and her newborn daughter Judith) that galvanized some of The Governor's own people against him, leading to his death.

What does that mean for the season? Not anything, necessarily--but certainly if season three is--as expected--the story of The Governor, beginning with his first appearance and ending with his death, it seems entirely plausible that Callies is simply preparing her fans for what's to come.

The Walking Dead Actress: My Character "Has To" Die