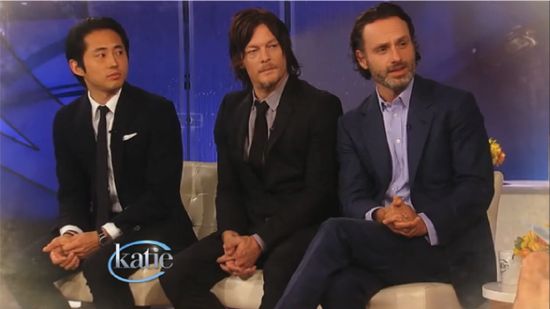 Several cast members of The Walking Dead recently visited the Katie Couric show to tape an interview, which will air on Friday. Andrew Lincoln, Norman Reedus, Steven Yeun, Danai Gurira and Lauren Cohan were among the cast members appearing on the show.

Promos for the episode are teasing that one of the cast members let out a secret slip about Season 4 during the interview. Based on the video, it appears that Andrew Lincoln is the cast member with the loose lips. After Andrew Lincoln says that they have a romance this season, Michonne reacts with surprise. The clip is certainly suggesting that Lincoln might have confirmed the much-rumored Rick and Michonne romance.

In addition to the possible romance spoiler, Norman Reedus talks about the odd gifts he has received from fans, including a breast implant. What did Reedus do with the breast implant? He threw it at Steven Yeun, before eventually using it as a phone cradle.

Also, makeup artist Greg Nicotero transforms a fan into a zombie on the show. The episode of the Katie Couric show with The Waking Dead cast airs on Friday, October 18, 2013.