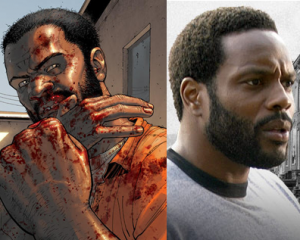 The rumors have been everywhere for a while now -- Chad Coleman had been spotted near the set of The Walking Dead in Atlanta, and Robert Kirkman had teased a fan-favorite character coming to AMC's The Walking Dead with the season's eighth episode in December -- and now it's official: Coleman has been tapped to play Tyreese in the hit zombie drama.

Coleman, a veteran of The Wire, will join the cast of AMC's mega-hit on December 8.

TV Overmind also reported that Morgan, who saved Rick Grimes's life in the pilot but remained behind and was never seen again, will also return in season three, although he won't be directly involved with the Woodbury storyline currently playing out.

That latter news is not yet confirmed...but if true, it may indicate that a final showdown between Rick's survivors and the Woodbury community happens in season three after all; in the comics, Rick didn't meet up with Morgan until after he fled the prison and returned to his hometown for supplies.

In the comic book source material, Tyreese served as a key part of Rick's group of survivors for nearly half of the series's run, having been introduced around the time of Shane's death.

The Walking Dead Casts Its Tyreese