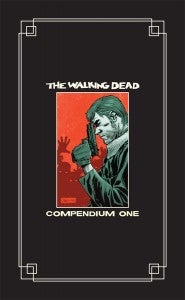 Image Comics today announced a new hardcover that's likely to be one of the most sought-after convention exclusives at next week's San Diego Comic-Con International: The Walking Dead Compendium, collecting the first forty-eight issues of the smash-hit series, will be made available in an ultra-rare hardcover version with a new cover by Charlie Adlard, available only at San Diego.

In fact, not only is the book available only at San Diego Comic-Con, but you can't even walk up and buy one at the show. Instead, you've got to get a lottery ticket at the Image Comics booth, and if you're lucky, you will have an opportunity to buy the book for $100. The system goes like this, according to a statement from Image/Skybound:

Because of the limited quantity, attendees will draw tickets at the Image Comics/Skybound booth (#2729) for a chance to purchase a Compendium. Attendees will draw from a bowl of tickets, and if the ticket they draw is a winner, they will get to purchase one copy of the Compendium. A limited number of Compendiums will be sold each day and are limited to one copy per person. Each attendee may draw tickets only once per day. The tickets will be available each day at the opening of the convention, beginning on July 11 (Preview Night), and will be available until all of that day’s compendiums are sold out.

The hardcover edition has never been made available in stores, but fans were able to get a glimpse of it earlier this year at the Emerald City Comic-Con. A second volume of the compendium has long been expected, as The Walking Dead #100 will hit the streets on the same day that Comic-Con International launches, meaning that there's more than the necessary 48 new issues to fill the massive tome. That volume was announced today in a special announcement in USA Today.