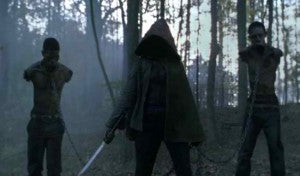 Above Average, a new online comedy channel from Broadway Video (the production company behind shows like Saturday Night Live and 30 Rock) is kicking off a music video series starting today--and their first choice of subject matter?

A tribute to Robert Kirkman's comics-and-TV phenomenon, The Walking Dead.

Titled A Song For The Walking Dead, the song plays a bit like one of those quasi-inspirational beer commercial songs that are popular to parody these days, and while pretty funny, it's not safe for work--at least not if you've got your speakers on.

Check out the video below!