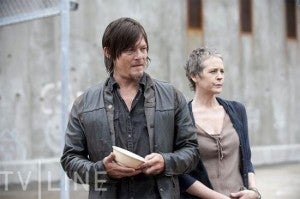 One of the biggest questions on The Walking Dead has been when Daryl Dixon and Carol Peletier will finally get together. According to Walking Dead creator Robert Kirkman, the answer might be never.

In an interview with TV Line, Kirkman said, "There's every chance that it's actually a no-burn and these two people don't get together. Daryl and Carol are very different people. These are two very damaged individuals, and that leads them to connect in a very serious emotional way. But it still remains to be seen whether that's actually going to spiral into a romance."

Ouch, we're starting to think that Kirkman might have it in for Daryl. At San Diego Comic-Con, Kirkman told Comicbook.com that he might kill off Daryl. Kirkman said, "But specifically about the Daryl thing–that fan reaction is going to get him killed. I feel like it’s a dare. Like, ‘Oh, really? You’re gonna riot? We’ll see…we’ll see. No one is safe."

The Walking Dead: Daryl And Carol Might Never Get Together