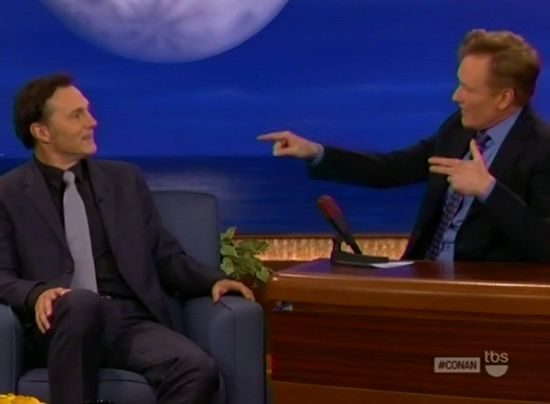 On Monday night’s CONAN show, David Morrissey, who plays The Governor on The Walking Dead, was a guest. When Conan O’Brien asked Morrissey if some people despised him just because of his character on the show, Morrissey said, “Yeah, people run up to me all the time and say, ‘I hope you die soon.’”

Morrissey added, “I take it as a compliment. I love to hate you people keep coming up to me. I was in the post office once and there was a woman in front of me waiting in line, and she turned around and saw my face and just dropped to the floor. And she was like, ‘Oh, my God, I hate you.’ And she ran out.”

Morrissey continued, “When I was at Comic Con this year, I walked out and ten thousand people booed me. And it was like, great…for an actor to be booed is fantastic.”

When Conan O’Brien suggested Morrissey’s character The Governor kept going into a darker and darker place, Morrissey disagreed. “He’s a nice guy. I think he’s sort of misunderstood. He does terrible things, but he just needs the love of a good woman I think,” joked Morrissey.