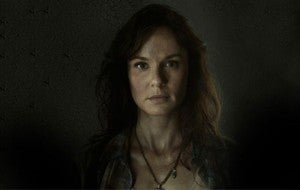 With The Walking Dead: The Complete Third Season set to be released on Blu-ray and DVD on Tuesday, AMC has been releasing deleted scenes from season 3. In this latest deleted scene from the Hounded episode released on ET Online, there is an alternate take on the scene where Rick comes to check on Carl after Lori’s death.

In the actual scene that aired, Rick only had some brief interaction with the group, before returning to his work clearing out the bodies in the prison. In the longer deleted scene, Beth asks Rick if he wants to hold the baby. Rick seems to ignore the baby, and he mutters, “I have to get back.” Of course, actor Jon Bernthal has claimed that baby Judith is 100% Shane’s baby, so perhaps Rick wanted no part of Shane’s baby at the time.

In addition to having no time for the baby, Rick also doesn’t appear to be interested in mourning his dead wife. Hershel asks Rick if he wants to have a memorial service for Lori. Rick responds, “No! Hershel, there’s nothing left.” Of course, when Rick went to get Lori’s body, he found a walker with a bloated belly instead, so there literally was nothing left.

Check out both the deleted scene below, as well as what was shown in the scene that actually aired on television.

Who Trained Bad Bunny for His WWE WrestleMania 37 Match?

Xbox Game Pass Could Be Coming to Steam