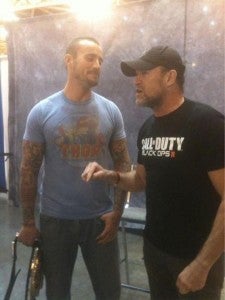 Potential spoilers for next week's midseason premiere of The Walking Dead follow.

Over the last few months, we've been covering the ongoing chatter between Michael Rooker, who plays Merle Dixon on AMC's The Walking Dead, and WWE wrestler CM Punk. The whole thing seemed a bit like a good-natured rivalry of opportunity at the time, something that probably came as a result of both of them appearing at a number of Wizard World conventions.

Tonight's two-minute preview of the upcoming midseason premiere of The Walking Dead, though, has us wondering whether there might be something more to it than just that.

Take a look at that video again.

Did you see those meaningful glances between the brothers?

Did Merle's demeanor--different than we've ever seen him before, with the over-the-top procalamations and theatrical voice strike you as odd?

How about the one-sided beating, in spite of the fact that we know exactly how formidable Daryl can be even in the worst situation?

Ever since the credits rolled on the midseason finale, fans have been wondering how both Merle and Daryl find their way out of this seemingly-hopeless situation, and it seems as though this scene might be hiding some answers.

I'm calling it right now: I think this whole act is something they've done before. These brothers have been two against the world their whole lives, with abusive parents and a zombie apocalypse and who knows what in between. It seems likely to me that this whole performance is something they've done when they needed exit strategy before--something based loosely on professional wrestling.

And maybe CM Punk will turn out to have tutored Rooker a little bit on how to make it work.

The Walking Dead: Did Merle Take Lessons From CM Punk?