Rick Grimes, we've been reminded numerous times by fans and the AMC blog this week, is a man who keeps his promises.

That's because during the Season Five premiere, Rick told Gareth, the leader of The Hunters at Terminus, that by the time their interactions were finished, Rick would have killed him with the machete he has in his bag with a red handle.

...and the idea that Rick "keeps his promises" was born.

Here's the thing: that scene never took place in the comics -- or at least "the promise" part of it never took place. Yes, there was indeed a very similar bloodbath, but the relationship between Rick's group and The Hunters was casual at best; The Hunters were essentially stalkers, hunting people in the woods (hence the name), not inviting everyone from miles around to come to their gated community. The promise was something invented for TV, and I think I might know why.

Rick similarly pledged to kill Negan, the leader of a brutal group of maniacs and killers called The Saviors, in the comic books. and it...didn't quite happen.

That was in April's The Walking Dead #125, the conclusion to the epic "All-Out War" storyline. 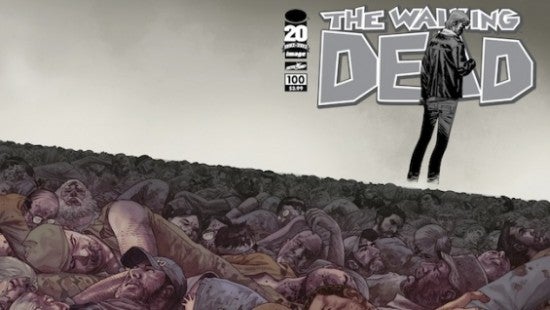 For context, though, we have to travel back in time to 2012's best-selling The Walking Dead #100.

That issue formally introduced a character who had previously only been discussed in hushed tones among the other survivors -- and one who would be the driving force in the title for 25 issues -- Negan. They'd heard about him at the Alexandria Safe-Zone, one of a number of settlements established by survivors of the zombie apocalypse that shared common travel routes and a rudimentary economy. Alexandria was the first such settlement Rick and his group found, and the residents there informed him of the existence of others. This all took place in The Walking Dead #69 or so -- which, for context, was three issues after the final appearance of The Hunters, the group Rick and company dispatched last week.

Negan's original sin in the series was that he set up an elaborate protection racket and would travel around to various settlements, offering them safety (mostly from retribution from himself and his ragtag army) in exchange for a share of their rations and supplies. Negan had found a way to live like a king without actually adjusting to the changing demands of the new world. He didn't have to hunt or scavenge or whatever else -- just roll in with a baseball bat wrapped in barbed wire and a bunch of goons behind him and make demands.

When Rick and company resisted, the result was that they were surrounded, forced to their knees and Glenn was killed, while Negan made gleeful noises and racist jokes.

Along the way, Rick was given an out -- sort of -- by Negan, telling him, basically, that he was welcome to take his shot at Negan, but that there would be consequences:

That's a kind of specific line, actually. "Stand up and put a knife in my throat."

And we got a payoff in The Walking Dead #125. After 25 issues of a pretty simple depiction of Negan as a "kill 'em all"-style bastard, Negan tried at the end of "All-Out War" to convince Rick that he does all of this stuff for his people, so that they can survive.

Rick calls him on his crap, telling Negan that without a thug like him making things worse for everybody, the few remaining humans could work together against the threat of the walkers. His speech is a bit reminiscent of the one delivered  in the TV episode "Too Far Gone," just before The Governor cut Hershel's head off. Surprisingly, though, the villain relents, and Negan has an epiphany, and he wants to work with Rick to build a better world.

"I've had it all wrong," he realizes. "I've been acting like a hungry dog, hoarding supplies, pushing others away for safety, for my people."

That bit of clarity doesn't do him much good, though... 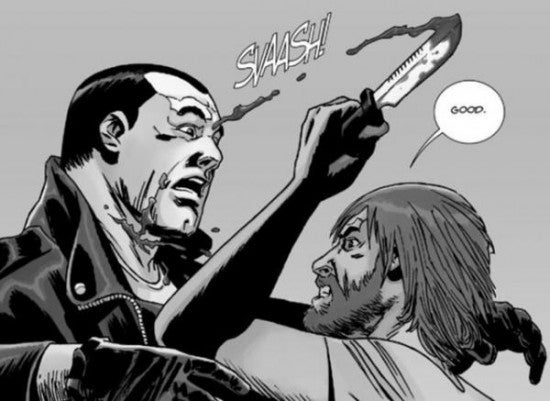 Oh, look. A knife to the throat. Just like he asked for.

But, no. He doesn't die there. Rick uses the near-fatal injury as leverage to keep Negan and his people from reconsidering, and places Negan under arrest, abdicating in some ways his role as de facto leader and embracing his role as sheriff -- one that he had before the apocalypse, and that Alexandria had offered him the chance to reclaim in order to earn his keep there.

What's the point of all that?

Well, in the comics, the massacre of The Hunters was a necessary evil...but it was very much treated as an evil. It's the moral low point of the series, and it caused a lot of discontent within Rick's group. He continued to seem unstable and surly for a while after reaching Alexandria, causing him to be distrusted by some there.The journey, from #69 when they arrived in the Alexandria Safe-Zone through #125 when "All-Out War" came to its somewhat anticlimactic end, was to take Rick from the maniac we saw in that church last night to the kind of man who would let Negan live.

What it seems they've done, then, with "The Promise" is to create a narrative device that makes all of that explicit. As they prepare for Negan to join the show, they seem to have created a beat in the story where, later, we'll be able to look back and say, "Season Five Rick wasn't ready to build a larger world; he was still too focused on simple survival." That the Terminians killed one of Rick's group -- that they would have killed anyone -- that's why they had to die, and the brutal, elaborate way they were killing people was a far worse crime than anything The Hunters were doing in the comics, so it's harder to really blame Rick's group for what happened.

So...maybe in order to get the theme across, they needed to set up this nearly one-for-one parallel? Something to make it really clear: "This is how Rick has changed."

The Walking Dead: Did The Terminus Storyline Set Up Negan Story?