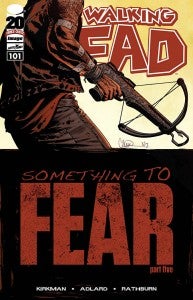 In July, The Walking Dead #100 sold more than 385,000 copies, making it the top-selling single-issue comic book of the last fifteen or so years. And while Marvel Comics readies an army of variant covers on their Marvel NOW! relaunch titles in a hope to unseat the cult-favorite title from the "best of the century" title they're so proud of, sales came back from Diamond Comics Distributors today to suggest that The Walking Dead #101, the follow-up to the centennial issue's status quo-shattering events, sold...

...well, we don't really know yet. Diamond has only released the top ten books so far for the month of August, along with a lot of things like market share data that not a lot of people outside comics industry management really care about. And in that top ten? All DC and Marvel, with no sign of The Walking Dead anywhere.

The Walking Dead's first two trade paperbacks, Days Gone Bye and Miles Behind Us, do appear on the top ten graphic novels chart, with the first volume coming in at #2 (just behind Geoff Johns and Gary Frank's Batman: Earth One) and the second volume taking the ninth spot (just above the collection of Marvel's Fear Itself event).

Avengers vs. X-Men #9 and #10 took the top two spots on the charts, followed by Batman #12, Justice League #12 and The Amazing Spider-Man #692 (the much-hyped fiftieth anniversary issue) to round out the top five. The next five were the first issue of Before Watchmen: Rorschach, AvX: VS #5, Before Watchmen: Doctor Manhattan #1, Green Lantern #12 and Detective Comics #12.

Reorders on Justice League #12 have been huge, and it may turn out to be the best-selling single issue of the lot in the long run once second prints and the like are considered, but since comics are ordered months in advance and DC didn't tease the Superman-Wonder Woman hookup until the week before the book was to be released, most retailers sold out and are waiting on more.

Prior to the multi-cover, multimedia extravaganza that was The Walking Dead #100, the title had been steadily climbing up the sales chart, recently becoming a regular fixture in the top 40 and occasionally breaking into the top ten. Whether its postition will be improved long-term by the success of the hundredth issue or whether things return to normal will likely tell us whether they actually brought any new readers in with their release parties and other gimmicks or whether it just sold so well because of a bunch of collectors trying to get all the covers.

And if it's the latter, expect more of the same from Marvel and DC. So let's hope for a great showing from The Walking Dead #101.